The last time I saw picture of someone with a broken skull, it involved rubber bullets and some Occupy Oakland protesters. The dude got carried away by protesters and eventually ended up in a hospital instead of being stood up to have a championship belt wrapped around his waist. Both broken craniums ended up with X-Rays like this one. 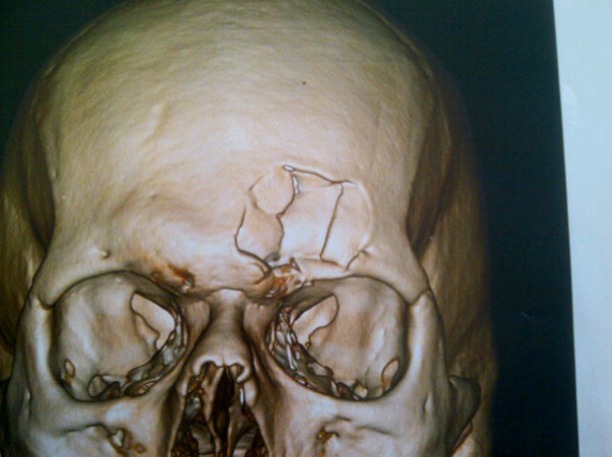 MMA is going through a rawesome stretch of manliness where fighters are sustaining all sorts of freak injuries en route to overcoming all odds to win their fights. We saw it with Siyar Bahadurzada in his fight against Paulo Thiago, Frankie Edgar in just about every fight he has ever been in, and now, we can add J.P. Joubert to a short list of the toughest fighters who ever lived. According to EFC Africa, he suffered a ‘Frontal sinus fracture and concussion’ in the first round of his fight. What that complex scientific terminology really means is that he broke his skull during his fight against Norman Wessels, then came back in round two and knocked his opponent out. Between this and the story of the fighter who got submitted but won his fight that we posted earlier today, you’re running out of excuses why you can’t do something amazing today despite your poor diet and broken DVR.

In Massachusetts, even when you're choked unconscious, you can still win your fight
← Read Last Post

Finally, the full ONE FC: Pride of a Nation card has been released, well almost...
Read Next Post →
Click here to cancel reply.