Lee Murray allegedly pulled off the largest bank heist in history, racking in an astronomical $83,000,000. I’m not going to tell you the story of Lee Murray. If you’re not familiar with this man, then someone should snatch your MMA fanboy card and ignite it with a cigarette lighter. Try Googling ‘Lee Murray’ to get up-to-date, and scold yourself after you’re done.

Most people are going to believe this interview is too incredible to be real. Trust me, I never thought it would happen until it actually happened. A few weeks ago, someone saw our ‘Free Lee Murray‘ shirt and decided to contact us through ‘WorldOverEasy.com‘. That same person told me that he could get us in contact with Lee and he would be eager to do an interview. Guffaw isn’t even the word. I didn’t even respond, until that same person contacted us a few days later with proof that he was in contact with Lee Murray. Still skeptical, I drummed up a lengthy list of questions and submitted them for Lee Murray to answer. I never thought I would get them back, days passed, and then the same person contacted me to inform me that it would just be better that I interview Lee Murray directly from his Moroccan prison cell. The person went on to tell me that Lee Murray (by some incredible and unknown means) is in possession of a cellphone and that he couldn’t answer the phone, but he could text back. Still stunned as to how the guy could smuggle a cellphone into a Moroccan prison, I sought some proof to make sure I wasn’t part of some elaborate troll job. The proof arrived, and needless to say, it was legit.

I conducted the entire interview via text on January 20th at 3:03pm PST, and six hours later, the interview ended.

Everything below is directly from a Moroccan prison, from the hands of Lee Murray. I’ve only corrected small typos, added punctuation and blacked-out the name of the person that put us in contact. This is an highly improbable and very expensive interview (midway, I called my phone provider to switch to an ‘international package’ in order to save money on each text). Big thanks to Nathan Fox for the illustration, originally commissioned by ESPN magazine. You can check his site out here.

Check out our ultra-rare exclusive interview with Lee Murray, directly from his Moroccan prison — only at MiddleEasy.com.

Update: For everyone that doubts this interview, I just received a text from Lee Murray (yes, from a Moroccan prison) and he wanted me to publish his address on this interview. So here it is:

I always kept myself in good shape even when I was isolated by myself. It’s easy now I have a sparring partner who has stand-up skills that could hold his own with most fighters in the welterweight and middleweight division in the UFC. I have kettle-bells, dumbbells, skipping ropes, bands, the only thing I’m missing here is the wrestling & BJJ, it wouldn’t take me long to get back to the top and besides, I’m more hungry than ever. The first opponent would get a hole punched in his head.Lee Murray 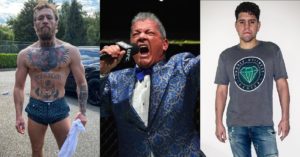