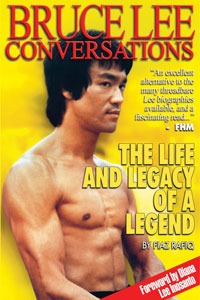 Bruce Lee is one of my heroes. He belongs in the same echelon as Michael Jordan, Walter Payton and my neighbor who helped me get into my apartment after I broke my key in the lock last winter. After watching ‘Enter the Dragon’ for the 5,000th time, I developed a fairly unhealthy obsession with the man known as ‘The Little Dragon’. That’s probably why those Chuck Norris jokes a few years ago just weren’t that funny to me. Who cares about Chuck Norris? Bruce Lee wiped the floor with him. In Bruce Lee’s new book (yeah he’s dead but that postmortem money is the best money. Just ask 2pac), people would challenge him while he was shooting ‘Enter The Dragon’ and often times…he had to dip his pimp hand in humiliation juice and slap a few extras on the set.

“This kid was good. He was no punk. He was strong and fast, and he was really trying to punch Bruce’s brains in. But Bruce just methodically took him apart.”

Turns out the extra started to tried to really hurt Bruce. Well, try.

“I mean Bruce kept moving so well, this kid couldn’t touch him…Then all of a sudden, Bruce got him and rammed his ass into the wall and swept him, he proceeded to drop his knee into his opponent’s chest, locked his arm out straight, and nailed him in the face repeatedly.”

After Bruce completed his genetic reconfiguration of the guy that challenged him, he dusted off and then taught the guy how to fight better. Dude didn’t even fire guy, he just told him to get back on the set. Nice.

So I guess the above mentioned Bruce Lee love-fest is just really a long winded way of saying there is a badass new book out called Bruce Lee: Conversations and in it are…conversations with all of his old students, boxers and current MMA fighters like Tito “I got screwed” Ortiz and Randy Couture. Check it out and learn some cool stuff about the guy who started the whole “whoah” noise that we all made as kids when we shadow Kung Fu’d each other. [Source]