There’s a fantastic documentary on Netflix called ‘The Wild and Wonderful Whites of West Virginia‘ that follows a family notorious for selling drugs, stealing government funds, and tap-dancing. It’s undoubtedly the most thorough and entertaining look into redneck culture that’s readily available to the public. Even their family tree rocks a cut-off flannel and a camouflage hat.

The closest thing that I’ve ever come to truly interacting with an authentic redneck MMA fighter was when I lived in North Carolina back in 2009. I met this guy at a bar (not in that way), let’s just call him John ‘the so obvious compulsive liar’. He had a tattoo of the Frank Shamrock logo on his back and showed me a pink laminated card in his pocket that certified him as a black-belt in muay-thai. I wanted to just hailstorm on his parade and inform him that you don’t get belts in muay-thai but listening to this guy talk was entirely too entertaining. He told me that he beat Chris Horodecki at IFL (and no, his name wasn’t Ryan Schultz or Anthony Njokuani, the only two guys that defeated Horodecki at the time). He continued to tell me that I could join IFL if I continued to work out. I’m not sure if he realized the IFL has been extinct for nearly five years now, but once again, you can’t let the truth get in the way of a good liar. Towards the end of the night, he tried to show me some BS move that involved holding my arm out for an extended amount of time while he placed his thumb around my wrist and did absolutely nothing. I tried to tell him that I just wanted to drink my cosmopolitan and watch the premiere of TUF 10 but he insisted that I get up so he can demonstrate some move he saw in a Jean-Claude Van Damme movie. For anyone who thinks I made that up, here’s a picture to prove it.

Barstool Sports took a visit to West Virgina to document an event called ‘Rough N’ Rowdy’ in which rivals from other counties come together in a ring to have an organized street fight. You know it’s serious when they announce that every female fighter should have a pregnancy test before their bout. God bless America. Check it out after the jump. 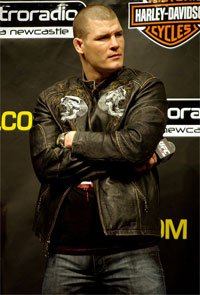 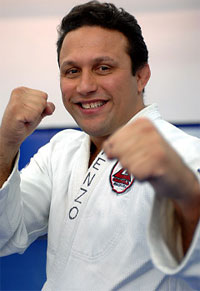 Don't worry, Renzo Gracie will be nice and gentle when he chokes you out
Read Next Post →
Click here to cancel reply.