Through weeks of planning, preparation and late-night EA Sports MMA gaming sessions, we’ve finally assembled the participants for the official MiddleEasy/EA Sports MMA Heavyweight Grand-Prix. The event will be a Live EA Sports broadcast, airing February 9th 2011 from 7:00pm to 11:00pm EST exclusively on Xbox Live. The eight participants were randomly assigned fighters and due to copyright issues, Bigfoot Silva and Sergei Kharitonov were replaced with Jeff Monson and Bob Sapp, respectively. The entire tournament will take place the night of February 9th, just three days before the real Strikeforce Heavyweight Grand-Prix goes down at the IZOD Center in Newark, New Jersey. The winner of the tournament will receive a thumbs-up from all the staff members at MiddleEasy.com and will face the EA Sports MMA MiddleEasy.com world champion of the world, ThaPremiere. When it comes to digital representations of MMA in modern culture, we keep it very real, folks.

If you don’t own an Xbox 360, the event will broadcast live on EASports.com. Click here to look at the grand-prix standings on EA Sports MMA’s website. 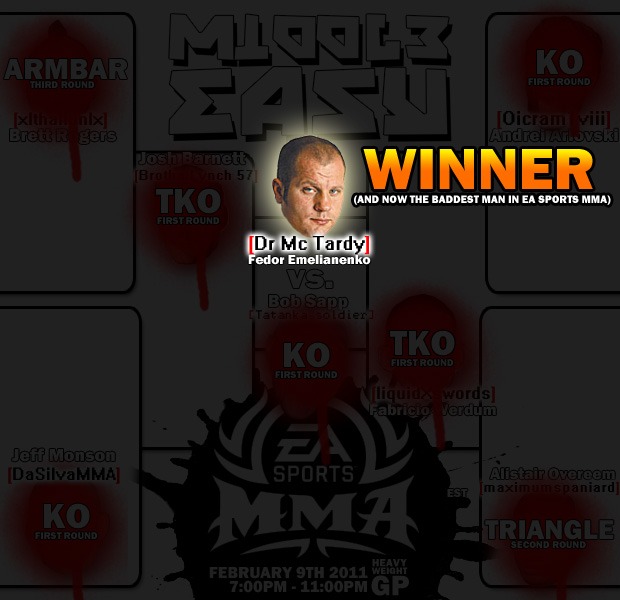 Just in case you missed yesterday’s face-off, this is the only animated .gif you will ever need to see
Read Next Post →
Click here to cancel reply.