I’ve already notified my body that on October 19th, it will be doing absolutely nothing. All muscle movement will be temporarily moved to my thumbs and I will be unavailable for most of the day. I’ve already scheduled a lineup of content for Tuesday, so it’s alright. You’ll still get your dose of MiddleEasy, and I will overdose on EA Sports MMA. Actually, on October 19th I’ll be at the EA Sports MMA launch party in Hollywood, California, taking Jagermeister shots with Fedor, Randy Couture and Babalu. It’s a tough life.

We caught up with EA Sports MMA designer, Rocky Rivero, to see what we can expect from the franchise in the future and it’s exactly what you would expect, and more. 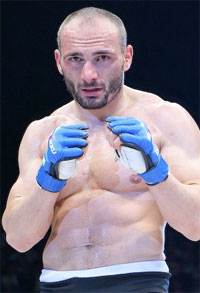 Stanislav Nedkov will have to wait just a little longer to make his UFC debut
Read Next Post →
Click here to cancel reply.