The Green Ranger is now an MMA fighter 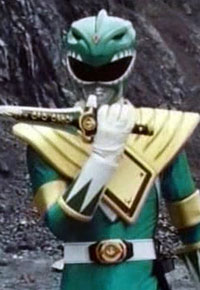 Back in the day I thought I was entirely too cool to watch The Mighty Morphin Power Rangers. While everyone was talking about which ranger was their favorite, I was too busy sitting in the corner of the lunch room listening to Masta P’s ‘Bout it’. I thought I was cool because I chose to elect hearing Masta P say ‘Uggggggggh’ on my CD player (damn, remember those things?). The Mighty Morphin Power Rangers was a direct rip-off of Voltron so I watched Ultraman instead out of protest. I was an afternoon-cartoon revolutionary. I didn’t follow trend, especially when it came to color coated futuristic ninjas.

Now The Green Ranger from the show signed a contract with Suckerpunch Entertainment and hopes to make his debut within a few months. Check out what ‘Jason David’ (The Green Ranger’s fake name) said in an interview:

“I was supposed to fight in 2007, but it fell through. In truth, I’ve wanted to put the work in until I’m ready,” Frank said in an interview from the Suckerpunch website. “I know I have a target on my back. Everyone is going to want to beat up the Green Ranger. But I am no Kimbo; I’ve been training for a very long time. I wanted to get in there before, but I got injured. But I’ll be ready when the time comes.”

If Ultraman decides to start his MMA career, expect a full-feature length interview. In the meanwhile, I’m still on my little protest. Well not really, I just can’t think of anything I would want to ask The Green Ranger other than whether or not he got it on with The Pink one. It’s a valid question. [Source]