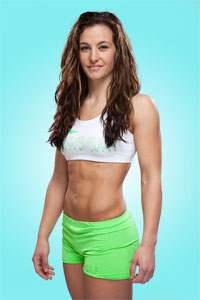 The opening round begins with Miesha Tate facing Finland’s Maiju Kujala followed by Carina Damm (who’s on a ten-fight win streak) taking on Japan’s Hitomi Akano. You may remember Akano from her catchweight fight when Cris Cyborg came on the scale overweight by seven-pounds. That’s nearly an entire weight division. Upon hearing the news, Akano pulled out of the fight, something that seems so logical that it’s almost hilarious. Through some heavy financial compensation, Strikeforce convinced her to take on Cyborg, who reportedly had a thirty-seven-pound advantage on the day of the bout. Weight wise, it was beyond a mismatch. It was as if Bobby Lashley decided to juggle three jockeys in the air while smacking each one in the face simultaneously. Akano tried pulling off every flying armbar she had in her aresenal, but at the beginning of the third round the ref jumped in after Hitomi received a flurry of punches.

Fortunately for Hitomi Akano (and every other chick in the tournament), all fighters made weight. Strikeforce Challengers: Phoenix goes down tonight at 11pm ET and it will also feature Ryan Couture’s first professional bout. Let’s start calling this guy ‘The Natural Light’. It’s cool, you can tell your friends that you thought of that nickname but only with the stipulation that you must spend the next thirty-minutes telling him/her how MiddleEasy.com changed your life. The card is headlined by Joe Riggs who recently said that viewers only tune in to ‘see men, not the women’ compete in MMA. He’s facing 6-1 Louis Taylor, a guy that has recorded first-round knockouts in his previous two fights and has not said that ‘women are lucky to be on TV’. Pick your fighter for the main event based on ideology alone. It’ll make things just a little more entertaining. You don’t want to miss this card, and if you do, consider our virtual relationship finished. Just kidding, I love you more than Jesus could ever love you.