Screw the zombies South Florida! This week it’s an invasion of UFC FLYweights

There has been an inundation of stories out of South Florida these past two weeks of humans exhibiting strange cannibalistic or aggressive zombie like behavior. Well, to be fair there have been other stories out of New Jersey, Maryland and even Sweden-but this story is about South Florida so for effect let’s exaggerate and sensationalize things to make it seem like there’s a rampant zombie plague spreading through the streets of Miami and the rest of southern Florida. Could it be the overabundance of ‘Pain Pill factories’ in Florida as exhibited in the documentary ‘The Oxycontin Express?‘ Maybe it is the a government conducting studies on the use of chemical warfare and using random homeless people as thier lab rats. Maybe it is government created propaganda agenda to terrify American citizens about the possibilty of a total end to drug prohibition in Mexico following the July elections. Whatever it is, it is at the very least a little bit scary.

With all the fear of human monsters buzzing about South Florida, it is the perfect time to bring in some other monsters to give the community hope. A long time ago, Yves Edwards told us if there was a zombie invasion two people-Hector Lombard and Tim Kennedy-would be the people who could save us. He’s probably right but I can’t help but think the smaller and faster FLYweights would be zombie killing machines too. Guys like Demetrious Johnson and Ian McCall are simply too fast for zombies. They can get low, take out the zombies legs and then use their lightning fast speed to rip a zombies heart out. If I was stuck in South Florida right now during the dawn of the zombie apocalypse I would be seeking out Mighty Mouse or Uncle Creepy to help keep me alive and it looks like Mike Miller from the Miami Heat has the same idea. You simply can not worry about flesh eating zombies when you’ve got this Friday June 8th UFC on FX headliners by your side. Sorry Mike Miller-these guys can probably save you from death via zombie human but they can’t save you and the rest of the Heat from the Celtics or Lebron’s bad karma. 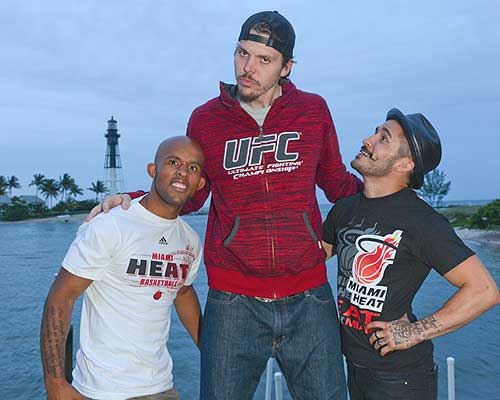 Fedor says that M-1 made up the whole thing about him retiring; he's not retiring anytime soon
Read Next Post →
Click here to cancel reply.