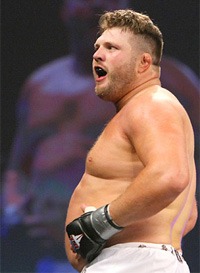 Props to Roy Nelson for being the only heavyweight that lists his primary mixed martial arts style as ‘Kung-Fu’. The Last Dragon taught our generation that we should all screw diplomacy and resort to Kung-Fu. Not only can it teach you to catch bullets in your teeth but if you train really hard, you even get The Glow. In an attempt to make your television screen resolution implode inside your living room, the UFC has decided to pit Stefan Struve, a guy that nearly towers at 7′ with Roy Nelson who arguably has the greatest belly in all of MMA. Fight! Magazine interviewed Big Country and he revealed some ways in which he’s been preparing to jump up and hit Stefan Struve at UFC Fight Night: Florian vs. Gomi.

“Training is always good here at the Country Club. Preparation for Stefan has been interesting. We just started to put people on shoulders so I get that look“

“The best thing about this fight is that we are mixed martial artists, so you never know. I intend on beating Struve with my length and my abnormal build to derail his win streak.”

“Struve has won three of his four fights in the UFC so he is a great opponent. [He] is right in the mix, so I would like to think I will be too”.

If stomach mass was an accurate representation of MMA skill, the dude that runs the comic book shop next to my place would have been the linear super heavyweight champion for a decade now. [Source]

The Henderson vs. Shields poster is surprisingly dope
← Read Last Post
Junior Dos Santos talks about his pillage through the heavyweight division
Read Next Post →
Click here to cancel reply.