Roger Huerta Looking to Get Career Back on Track in One FC, But Zoro Moreira Has Other Plans

The past few years have not been kind on lightweight MMA standout Roger Huerta. There were very few fighters as promising as Huerta was in the UFC, but now he finds himself 1 – 5 in his last six bouts and looking to jump start his career in the One FC cage. The only problem for this UFC and Bellator veteran is that the giant that is Zorobabel Moreira from Evolve MMA is standing in his way, and not looking to give an inch to Huerta. 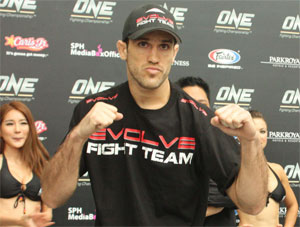 Roger Huerta quickly ascended the ranks of the lightweight division in the MMA world starting in 2003. By the time he reached the UFC in 2006 he had moved from a prospect to a star, stringing together six impressive wins over the likes of Clay Guida, Leonard Garcia and Alberto Crane. Huerta even appeared on the cover of Sports Illustrated, the very first Mixed Martial Artist to do so, and was poised to become UFC’s breakthrough hispanic star before there was a Cain Valasquez. Huerta ran into the force that was Kenny Florian, dropping a hard-fought decision when he decided to pursue an acting career. His comeback has yet to yield the results that he wanted, though, and he looks to change that in One FC.

Huerta brings an incredibly well-rounded game with him into the One FC cage at One FC: Destiny of Warriors, with his smooth standup and solid ground game. He was once known as one of the most exciting fighters in the UFC, and proved to be incredibly tough in his bouts in Bellator, only losing to the best of the best, always wanting to test his skills. Huerta was no different in making his One FC debut, as he wants to get back in the win column with a legitimate win, as he stated he did not wish to fight Phil Baroni, who is facing a similar recent fight record.

Ask and you shall receive, as One FC is always looking to provide exciting fights to fans and fighters alike, as they are throwing Roger Huerta into the fire against one of One FC’s rising stars at lightweight, Zorobabel Moreira. Zoro now has two big wins in One FC and is looking to make that a third. He is one of Evolve MMA’s biggest prospects, both literally and figuratively, as he stands at 6’3”, which is a giant at 155lbs. Zoro is known for his brazilian jiu-jitsu skills, winning his last fight against Filipe Enomoto with a thrilling third round armbar, winning One FC’s submission of the night award. As with all of the fighters at Evolve, Zoro does not just rely on his strengths, but also works away at his striking prowess as well and has shown to be a lot more comfortable on his feet over his last few fights.

At One FC: Destiny of Warriors a former UFC star will do battle with one of One FC’s rising stars in what has promised to be an action-packed bout. Roger Huerta is looking to reignite the fire that made him a breakthrough star, while Zoro is looking to continue riding the tidal wave of success that he has had of late. It is safe to say that both men will be looking to leave it all in the ring, and that at Destiny of Warriors One FC’s lightweight division will shine brighter than it has before.

Masakazu Imanari Versus Leandro Issa at ONE FC: Destiny of Warriors is a Classic Submission Battle
Read Next Post →
Click here to cancel reply.