Ricardo Almeida is helping autism, one paddle at a time 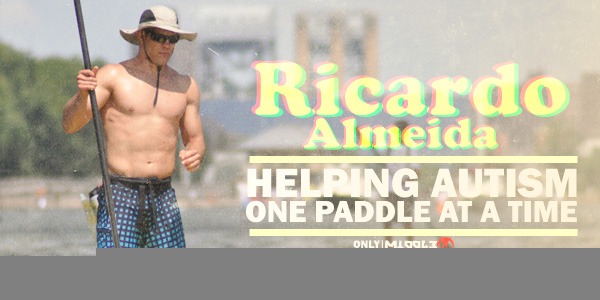 Five days after a fight in the UFC, most fighters are generally sprawled out on a sofa covered in ice-packs and taking pain medicines. They’re probably thirty pounds heavier than they were at weigh-ins, covered in cuts & bruises and surviving on a steady diet of bacon cheeseburgers & Bud Light (or poutine & Labatt Blue, if you’re Canadian). The sight of steel-cut oatmeal, protein shakes and any sort of physical activity is the furthest thing from their minds until they get that next phone call from Joe Silva. While taking breaks from training are generally acceptable forms of recovery, that’s what separates most fighters from Ricardo Almeida.

Ricardo’s son was diagnosed with autism, a neurological disorder that’s a lot more common than you think. A week before UFC 117, I heard that Ricardo Almeida registered to participate in the annual Sea Paddle NYC, a twenty-eight mile paddle race around NYC to benefit autism awareness. I’ve never heard about this event before, but having lived in New York my entire life, I had an idea of how raw something like this would be. The gist of it is simple: You stand on a surfboard with a paddle and you do what Henry Hudson did in 1609, except without a boat, competition and ice cold coconut water.

I gave Ricardo a call at around 6:00am on the morning of the paddle to tell him I was heading over to the dock. Ricardo was already en route from New Jersey on the fastest speedboat I’ve ever seen. If boats were fictional robotic humanoids, this thing must have been related to Optimus Prime. Ricardo dropped into the water and for the next seven hours, an assortment of Renzo Gracie disciples on boats powered by Twin-Vortech-Supercharged 502s would watch Ricardo do a lap of New York City.

Throughout the trip, Ricardo expressed his pain, but he refused to let us drag him any longer than it took him to get re-hydrated. Some experienced sea paddlers even split the distance between teams of three or four people. Speaking with several Hawaiian veterans of the sport, they agreed this is by far the longest and hardest paddle they’ve ever done. They also said it was the most scenic and they were proud the money raised was for a tremendous cause.

People have different reasons they choose to fight. Brian Stann does it for his fellow Marines, Randy Couture does it to put retirement homes out of business and Ricardo Almeida does it for the love of his kids. If it means there’s a chance at improving the quality of his son’s life through medical research, he’s willing to endure any distance necessary to see it through. Ricardo is a real life superhero and he hopes that more of you might join him next year.

For more information about Sea Paddle NYC, please visit their website to see how you can volunteer or participate in the future.

Special thanks to Team Renzo Gracie for inviting me along for the ride (and the subsequent bottle of aloe vera for my sunburn). Props to NYC for hosting such a rawesome event and always being the perfect backdrop to every photo ever taken and finally, a special congratulations to all participants of Sea Paddle NYC for raising nearly $300,000 for autism research!