If you have been following Mixed Martial Arts for the past ten years or so, the name Babalu is one that you’ll readily recognize. Renato “Babalu” Sobral has been around the block quite a few times, and has had his run in the big leagues with the UFC and Strikeforce before he headed to One FC. At One FC: Destiny of Warriors on June 23rd Babalu makes his One FC debut against tough Japanese Light Heavyweight Tatsuya Mizuno. Mizuno is a tough fighter in his own right, coming out of the legendary U-File Camp in Japan, home of Japanese legend Kiyoshi Tamura. 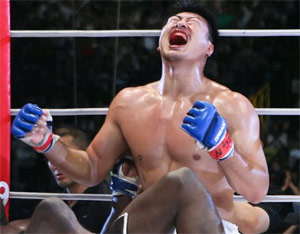 Renato “Babalu” Sobral is by all means one of the hardened veterans of the Mixed Martial Arts world, but is sadly overlooked by many. Babalu’s storied career dates all the way back to 1997 in Brazil and then moves on to Japan where Babalu competed in the vaunted promotion RINGS and then to the UFC. His battles in RINGS and UFC were legendary, where he did battle with huge names like Fedor Emelianenko, Dan Henderson, Kiyoshi Tamura, Mikhail Ilyukhin, Maurice Smith and Chuck Liddell.

A loss to Chuck Liddell in 2002 set him on a ten fight winning streak, including a win over future UFC Light Heavyweight Champion Mauricio “Shogun” Rua before Babalu fell to Liddell yet again. A year later, his UFC career came to a halt when the trash talk between David Heath and himself spilled over into the ring, when Babalu refused to let go of an anaconda choke after he was declared the winner. Babalu went on to become Strikeforce Light Heavyweight Champion, yet is still overlooked in the conversation of elite Light Heavyweights.

Tatsuya Mizuno came up in the MMA world under interesting circumstances. To understand where he came from, you have to understand that MMA in Japan originated in professional wrestling, deeply rooted in the UWF promotion, which branched off into Pancrase, UWF-I, RINGS and even PRIDE. A young Kiyoshi Tamura went with Akira Maeda to form RINGS and became a huge star in Japan. After RINGS dissolved, Tamura found himself competing for PRIDE but still loving professional wrestling and wanting to give back to Japan.

This sparked the formation of U-Style, a realistic professional wrestling organization primarily utilizing the talent from Tamura’s own U-File gym. They not only trained in professional wrestling, but trained in real fighting as well. This is where Mizuno fits in, a former Judoka in his youth, he looked to become a fighter, and chose Tamura’s U-File camp as his home. He was quickly thrust into the spotlight, competing against notable brazilian fighters Thiago Silva and Ausserio Silva, finding himself ill-prepared for the challenge. Things didn’t get easier for him, as his debut in DREAM was against Heavyweight legend Mirko Cro Cop.

Mizuno’s career has without a doubt been impacted by some incredibly poor booking decisions, putting him at a disadvantage and sadly, he has never been able to truly get any momentum going for him as he has been pushed between weight classes in mismatches, such as his 2010 bout with Sergei Kharitonov. Mizuno enters the One FC cage on June 23rd looking to prove he belongs in the conversation as a top Light Heavyweight, without the distractions of being tossed into fights against heavier opponents at a disadvantage. He shares some opponents with Babalu as well, with both having wins over Trevor Prangley and a loss to Gegard Mousasi. What is even more interesting is the number of victories that Babalu holds over Mizuno’s mentor, Kiyoshi Tamura.

Both men bring a lot of history to the ring with them on June 23rd as they make their One FC debuts at One FC: Destiny of Warriors, and have a lot to prove. Mizuno for once will face an even playing field and can show the world what he is made of, while Babalu is looking to once again prove himself among the elite, but this time, when he gets to the top, he will look to hold onto it for as long as he can and cement his legacy. One FC proves a neutral meeting ground for new beginnings for both warriors, but only one can come out the victor.

Brett Rogers talks to us about Bellator, TRT and that whole domestic abuse thing...
Read Next Post →
Click here to cancel reply.