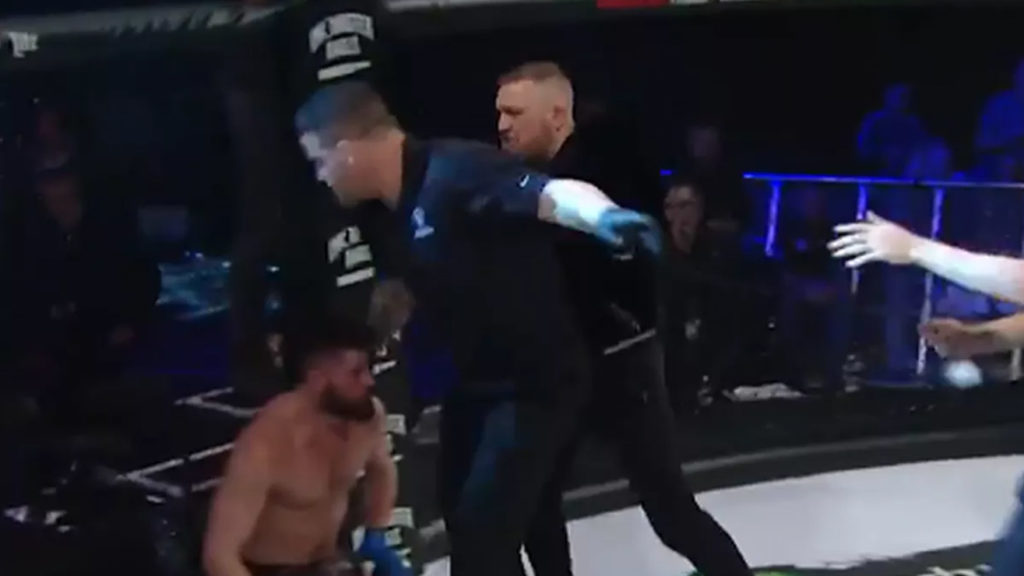 Last night there were some incredible fights at Bellator 187, but it was a UFC fighter Lightweight champ Conor Mcgregor who stole the show.

McGregor wildly stormed the cage to celebrate the victory of his Straight Blast Gym teammate Charlie Ward, who finished John Redmond at the Dublin card. When referee Marc Goddard intervened to restore order, as Mcgregor was not a licensed cornerman, not allowed to be inside the cage-he shoved referee Goddard and even slapped an official Mike Johnson in the face.

Mike Mazzulli, a President of the Association of Boxing Commissions and Combative Sports, released an official statement about the last incident via MMAjunkie:

“While the Mohegan Tribe Department of Athletic Regulation (MTDAR) was regulating Bellator 187 in Dublin, Ireland, on November 10th, 2017, the following events took place during the Ward vs Redmond bout. Mr. Conor McGregor who was a spectator at the time, disrupted the event by scaling the cage prior to the conclusion of the bout. Mr. McGregor’s conduct jeopardized the health and safety of the bout participants by delaying necessary medical attention to the fighters that were injured during the round.”

Commissioner also said any kind of sanction would have to come from a commission that licenses McGregor. Even UFC president Dana White and other respective commissions in the past have not been lenient when it comes to fighters putting their hands on referees.

Mcgregor has some kind of history with referee Goddard. Last month at UFC Gdansk event, Goddard had to escort McGregor back to his seat, because he was attempting to coach his teammate Artem Lobov in a fight against Andre Fili. As per commissioner, McGregor could face severe penalties, including hefty fines as well as even being suspended.

Pic: Yahoo Sports reports Conor McGregor was arrested at his hotel then deletes it
Read Next Post →
Click here to cancel reply.