Wait, is this really a picture of Conor McGregor?

Early on in the Conor McGregor ESPN interview he asks himself is he the fish or the whale?

After McGregor utter this phrase the remainder of the interview is null and void. Mystic Mac sparked the entire problem in under 13 seconds time. This it. Walk it off.

The rest of the interview really is hit or miss. A lot of rambling and getting on a soapbox but nothing is really said. Even when Ariel directly asks who Conor wants to fight next, the answer is a very non-answer. It’s almost 40 minutes of non-answers to be honest.

At the end of the day it is still Conor McGregor so it still is a much watch, but something about it seems off. Maybe it’s because the whole interview was born out of PR damage control, but where is the fire in the belly?

When you sucker punch a 50 year old man who isn’t looking, where do you really go from their? If you’re Mystic Mac you talk to Ariel Helwanit to apologize.

So you have already seen or read about the interview, which brings MiddleEasy to exhibit B. What the fook is going on with Conor McGregor in the picture below? Is that even him?

The alleged snapshot is from outside the Irish pub where McGregor tried to end that old man sitting at the bar. Assuming this is after the incident in question?

This like seeing your teacher on summer break dressed in normal clothes. You just caught your boss walking out of the shadiest male and or female strip club in town. This pic of Mac is like walking in on your parents banging away like it’s the last day on Earth.

We all are shook. Is that really Conor McGregor? 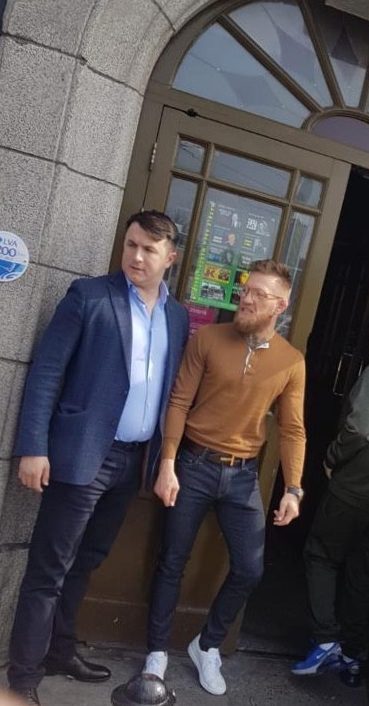 H/T @hugh_madson for the find and or hanging out at Irish pubs in the middle of the day with his Polaroid instant camera.

Dustin Poirier: 'I'm About To Make History' Against Khabib Nurmagomedov At UFC 242
Read Next Post →
Click here to cancel reply.