Pic: After one year suspension Jon Jones posts a Crying Jordan face on his body then deletes it

Oh to be a fly on the wall inside the mind of Jon Jones. The scenery inside Bones Jones brain is constantly rotating, controlled by a panel switch located in a book case. With a tap to the temple Jones mind landscape goes from 2AM club, weight room, behind the wheel of an automobile, to the cage and even at his desk sitting in front of a keybaord.

Inside Bones’ soul or maybe in a past life Jon Jones was a forum troll.

If a keyboard warrior were blessed with the inhuman skill set of Bones Jones then he too would have followed roughly the same career arc as the youngest UFC champion ever. Quick rise, rapid fall, comeback story, fake persona dropped and heel embraced are all the actions of your typical well know forum troll stalking the comment sections.

Looking down the barrel of a one year suspension following his UFC 200 nosedive, Bones is embracing the madness of it all. To put it in the simplest terms maybe the most talented fighter MMA has ever seen just got busted for taking a contaminated sexual enhancement pill. Really? LOL this sport.

To sum up the situation Jon Jones has found himself he did what any keyboard warrior would; he made a meme out of it! And a Crying Jordan meme, which currently is the “knock knock” joke level of meme-dom at the moment. Then to put a bow on his Internet reputation, Bones Jones quickly deleted the picture from the MMA Universe.

Update: Jon Jones has changed is Twitter avatar to reflect his current state of mind 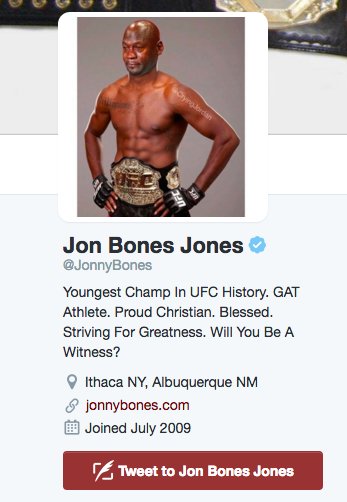