Now this is a DREAM poster I can believe in…

Good morning America. While you have been asleep, DREAM have been busy. Turns out that Patricio ‘Pitbull’ Freire isn’t the only Brazilian with a hand injury. Dan Herbertson from MMAFighting reported that Willamy “Chiquerim” Freire is out of his fight with Tasuya Kawajiri at DREAM – Fight for Japan: 2011 Japan Bantamweight Tournament Final, not to be confused with DREAM 17, an event which has not yet been announced. He will be replaced by Drew Fickett whose most recent fight was a first round loss to Brian Cobb at MFC 30. On top of that, Atsushi Yamamoto has suffered a possible detached retina and will be replaced by Keisuke Fujiwara to face Kenji Osawa for the right to third place in the Bantamweight GP.

If any normal human was hit with an Ubereem knee that knocked them through the ropes, they would most probably have retired or died. Todd Duffee has done neither and will make his second DREAM appearance at the DREAM Bantamweight Tournament Final event against KOTC fighter and baller nickname owner Nick ‘Afrozilla’ Gaston. Also added to the card is a fight between Tatsuya Mizuno and Strikeforce fighter Trevor Prangley. These fights will all go down on July 16th, at a time when most of you will be sleeping, damn you time difference. [Source] 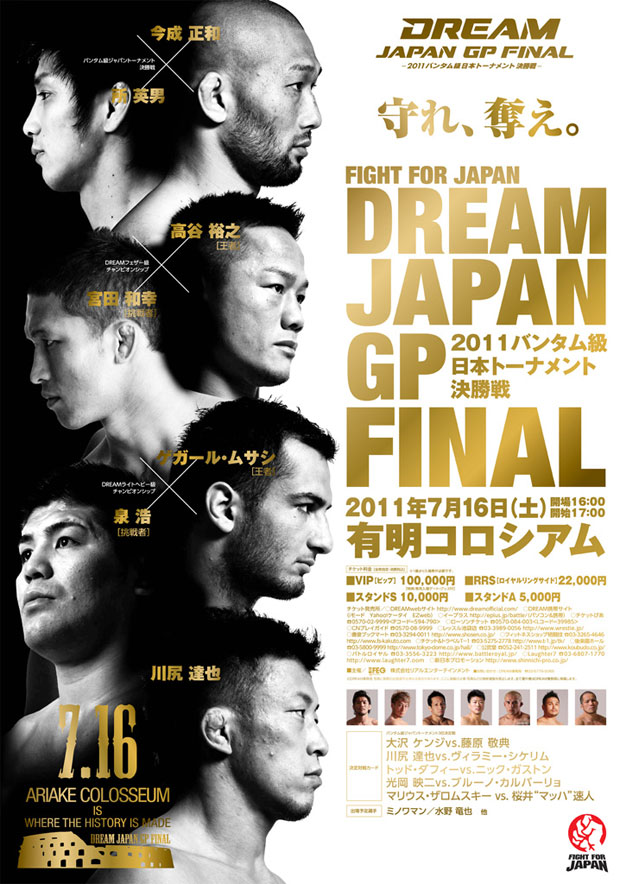 In the thumb wrestling world, Satoshi Ishii vs. Mark Munoz is all that matters
← Read Last Post

Joe Rogan is a huge advocate of judges actually using their monitors
Read Next Post →
Click here to cancel reply.