Posted on Last updated: September 4, 2010 By: Author Team ME 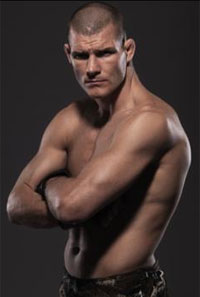 After collecting a series of overhand rights from two of the greatest fighters to ever compete in Pride FC, Michael Bisping is still bewildered by the concept of not hitting the rest of his division with his verbal artillery. Most of you would be divided on where this falls in the never-ending debate of all things baller/buster, but between wanting to punt Anderson’s chin, demanding a rematch with Wanderlei, and questioning Chael Sonnen’s sexuality, proves that Bisping has the greatest life-coach on the planet, and that all things are possible through an enormous amount of confidence.

Bisping’s most recently set his verbal trajectory on Dan Hardy for being a traitor to England, but to make his quota for the week, he’s also letting us know how he feels about fellow UFC middleweight Patrick Cote.

“Patrick Cote is a piece of (expletive). I’ve met Patrick Cote a couple of times. I’ve always found him to be okay, we’ve shook hands and I’ve had no issue with Patrick Cote and then out of the blue, he’s talking (expletive) about me. He’s just trying to make himself relevant again and he’s trying to talk himself into a fight with me, which I’m not going to oblige. I know I’m talking about him now because you asked, but I’ve just distanced it. I think I’m above Patrick Cote and he’s beneath me. He needs to stop talking (expletive) about me and get his arse in the gym and try and win a fight.”

If you don’t like what Bisping has to say, he plans on serving you a tall glass of Haterade after his fight with Sexiyama on October 16th at UFC 120. At least Bisping admires Sexiyama enough not to diss him. It’d be hard to make fun of a dude who’s aesthetically perfect in the most heterosexual way possible. [Source]