Melvin Manhoef and Yoshiyuki Nakanishi set to go to war at One FC: War of the Lions

When One FC announced the signing of Melvin “No Mercy” Manhoef, the world took notice, heads were turned and the chatter immediately began. One FC is without a doubt dedicated to the growth of Asian Mixed Martial Arts, which includes booking the biggest names as well as the hottest prospects in Asia to compete and grow under the One FC banner. As dedicated as they are to growing Asian MMA, they also understand that to facilitate this growth, they need to be able to bring in the big guns from around the world and have the best fighters competing against each other.

Melvin Manhoef is just that; one of the best in the world. If you are inclined to look at records, Melvin’s MMA record is 24 wins with 9 losses in an astonishing range from Middleweight all the way up to Heavyweight. To say that Melvin Manhoef fears no man is an understatement, as one of his biggest wins in his career came in 2008 when he was thrown into the fire by DREAM, competing at Heavyweight against Mark Hunt. Mark Hunt, who is currently on an incredible three-fight win streak in the UFC is a natural Heavyweight or even Super Heavyweight and one of the hardest hitters in the world of combat sports. The only problem for Hunt was that Melvin Manhoef might be a Middleweight, but he hits like a Heavyweight. Melvin is a fighter who fought in K-1 against Heavyweights and Super Heavyweights and he did really well. Hunt suffered his first loss via Knockout in MMA, ever, and it was against a Middleweight. It was against Melvin. 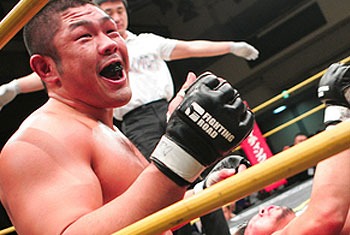 That is the kind of firepower that Melvin Manhoef brings to a fight. Manhoef has been in some of the most memorable brawls in MMA history, including legendary wars with Cyborg Santos and Robbie Lawler. He also has some of the most incredible knockouts in MMA history, like his wins over Mark Hunt, Kazushi Sakuraba, Kazuo Misaki and many, many more. It is safe to say that Melvin Manhoef brings a lot of history and a lot of firepower into his bout with Yoshiyuki Nakanishi at One FC: War of the Lions, but does he have the right tools to put Nakanishi on his ever-growing hit list?

If anyone has a weakness, it is Manhoef and the armbar, which for a fighter like Yoshiyuki Nakanishi should be a clear opening for him. Nakanishi won the All-Japan Sambo Championship at -100kg a staggering four years in a row, from 2005 to 2008, before he decided to take his MMA career seriously as a full-time affair. Sambo, much like Judo, focuses on throws and submission holds with a focus on effective striking, as well. So there should be no doubt in your mind that when push comes to shove, if Nakanishi sees an opening for the armbar, that he’ll take that arm and crank on it until Melvin is forced to tap out.

For those of you who have never seen Nakanishi, he is the current DEEP Light Heavyweight Champion and for a fighter with a background in Sambo, he holds an amazing six of his eleven wins via Knockout. It is safe to say that he is no slouch as a stand up fighter, and while he is not on the level of Melvin Manhoef, as long as he can fight his way to the ground he should be able to not only hold his own, but look great. A win for Nakanishi over Manhoef would be huge for his career, as he steps into the One FC cage for the first time and faces his toughest challenge on the biggest stage yet.

Manhoef’s original opponent of Renato “Babalu” Sobral had to drop out, and while that would have been an amazing fight, introducing a talent like Yoshiyuki Nakanishi to One FC in a high profile fight like this is a great idea, possibly even making for a better fight. Nakanishi is a young prospect and could be an incredible asset for One FC in the future, so a chance against a name like Manhoef could be a great springboard for his career. At One FC: War of the Lions the fans are being treated to a fight between a great prospect and one of the premier knockout artists in the combat sports world. The fight shows both sides of the sword that One FC brings to the table; the best international talent and the best Asian prospects.