If three years ago you told me that I would be writing an article about someone named ‘Maximo Blanco’, I would have said: ‘Where did you get that time machine? Let me try it out.’ I would then confiscate your time machine and travel back in a time before you had the time machine and then inform you that not only have I acquired a time machine, but I also know about a guy called Maximo Blanco who will be the future of MMA in 2011. You would probably respond back with something ignorant like ‘Where did you get that time machine?’ at which point I would say ‘From you, in the future — a future that will never happen because I prevented it’. I’m sure if I pulled some temporal trick like that in a third-world country, I would be revered as a god or some omnipotent deity. Little do they know, I flick boogers across strange rooms when there’s no napkins, an activity very ungodly.

Maximo Blanco has also romanticized about the notion of going back in time and in this interview with The Grappling Dummy, Blanco says he wants a time machine to go to the not-so-distant past to beat up his high school bullies. [Source] 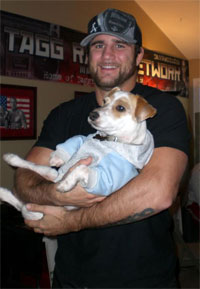 If you have the ION channel, then you can watch Phil Baroni at UFC 125
← Read Last Post
If you're a struggling female MMA fighter, here's your chance to be on a reality show
Read Next Post →
Click here to cancel reply.