Many of you still remember Marcus Davis’ five-year long UFC career mostly from his Knockout of the Night award he received over Jason Tan at UFC 72. Although, some of you may remember Davis from that thing incubating his eye just after his fight with Nate Diaz at UFC 118. Since he was released from the organization early in 2011, Marcus Davis has been traversing the globe with some level of success. Last night he took on Waachiim Spiritwolf in the highly anticipated Bellator 93 bout. Of course it being a Spiritwolf fight, something freakishly tragic happened before the two could truly consider it a scrap. Early in the first round Marcus Davis landed a devastating knee to the groin as Spiritwolf was using the cage to get back on his feet.

Or at least we thought it was an illegal groin shot. According to Marcus Davis, the doctor told him there was no contact to the groin and instead, Waachiim suffered a panic attack, warranting a ‘No Contest’ between the two. I guess Waachiim is trying to pull of his best Paulo Filho. Props to @Zprophet_MMA for the .gif and Brian Taylor for the banner illustration. 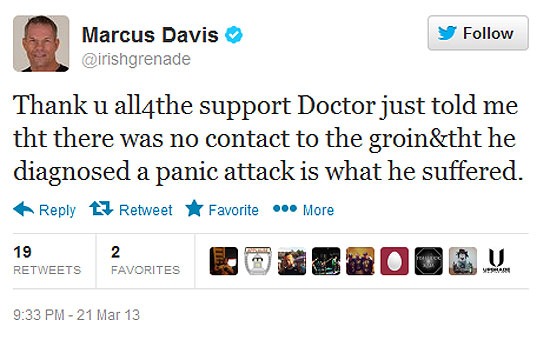 And this is your epic karate knockout of the week...
← Read Last Post