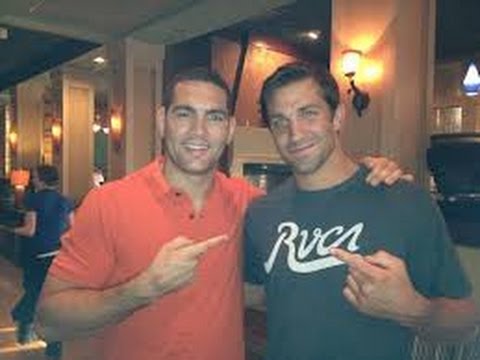 Luke Rockhold and Chris Weidman are the stars of the best co-main event in the history of MMA. The stakes were there – two men in their prime, Strikeforce versus the UFC. Truly number one versus number 2. The fight showed off their brilliant skills with Weidman berserking early and Rockhold doing what he could to embrace the grind and survive.

Round 2 saw both men exchanging body kicks, both men slowing down but and taking their time, and picking their shots, then in the third round, after Rockhold looking like his liver was getting blasted, took down Weidman and absolutely turned his face into a horror show with a minute straight of elbows and fists.

Round 4 saw Weidman wandering the octagon until he was trying out for a role in the Walking Dead, and he spilled his blood once again with Rockhold wailing away on his New Jersey face.

In a pile of blood, that’s how it ended, and Luke Rockhold was the new UFC middleweight champion of the world.

It was glorious. And it was everything a title fight should be. It was truly two supreme athletes facing each other at the perfect time.

*The original gif got Zuffa’d but here’s a decent highlight video, skip to 1:30 for a face smashingly good time.
https://www.youtube.com/watch?v=1QrND1RylyE?t=1m31s

A Lesson in Street in MMA: If you rush your opponent don't fall and KO yourself
← Read Last Post

Replay! Conor McGregor knocks out Jose Aldo in 13 seconds and is now KING OF THE FUCKING WORLD
Read Next Post →
Click here to cancel reply.