Those Koreans are lucky, at least they don’t have their police department shooting innocent people and using war drones on their citizens like we do in Los Angeles. Granted, South Korea does have that looming threat in the form of a crazed North Korea testing nuclear weapons just because they want to. I’m not sure what the lesser of the two evils are in this scenario: Kim Jong-un and his strange, robotic army or the LAPD and flying, killer robots. Damn, if I lived in Finland none of this would concern me. Easter is like a week long out there and it ends with a government-sponsored parade of a mock-crucifixion held in Helsinki. Not sure how festive you can get when you’re recreating a dude getting nailed to wood and dying of blood loss — but those damn Fins found a way.

Unfortunately MMA isn’t as big in Finland as it is in South Korea — and it shows by Road FC’s recent announcement that they’re constructing an entire Roman-like coliseum for their MMA shows. The coliseum will also have a MMA training facility and the promotion plans to host a broadcasted event inside the arena every month starting in March. Check out a picture of the nearly-finished venue below.

Update: Road FC contacted us to clarify the picture attached to this article is from the Jangchung Gymnasium, not the new Road FC coliseum which is still being built. 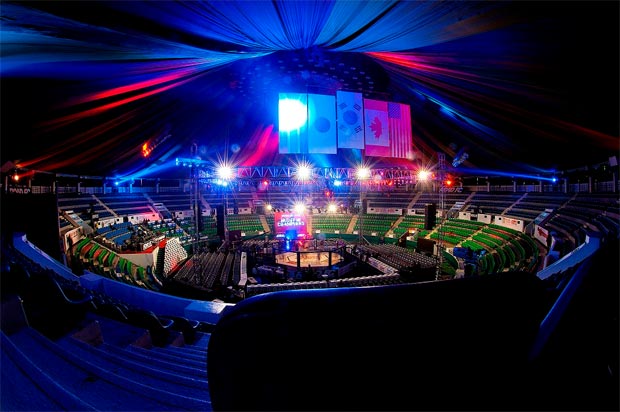 LiverKick | A Review of Road to Glory: What Could Have Been Better?
← Read Last Post

Even though Cyborg wants to be released from the UFC, she says Ronda Rousey is running from her
Read Next Post →
Click here to cancel reply.