The UFC has been under a firing range of bad press as of late, now they a have a friggin’ strange demon voice to explain to conservative right-wingers in New York. LOL at MMA getting legalized in The Big Apple anymore. Seriously though, I can’t be the only person that heard that strange demon-like voice play just before Sonnen vs. Jones tonight at UFC 159. We need someone to pull that audio immediately so MMA fans can invent even more conspiracies on how Dana White is part of the Illuminati.

Well folks, Jon Jones vs. Chael Sonnen is over. Some people are going to say that Jones may have landed an illegal knee to Sonnen’s face towards the end of the fight, but everyone is going to be endlessly discussing Jon Jones’ mutilated big toe that he (and the UFC cameras) noticed just after the fight ended. Chael, this dude has such a tragic career in the UFC. He was seconds away from defeating Anderson Silva at UFC 107 before getting triangled and tonight at UFC 159 if Sonnen could have survived the first round, he would be walking out of the Octagon the UFC light heavyweight champion. Amazing.

Hold up, we’re not done grossing you out. Behold Jones’ toe mangled toe. Props to Jason Probst for the screen cap. 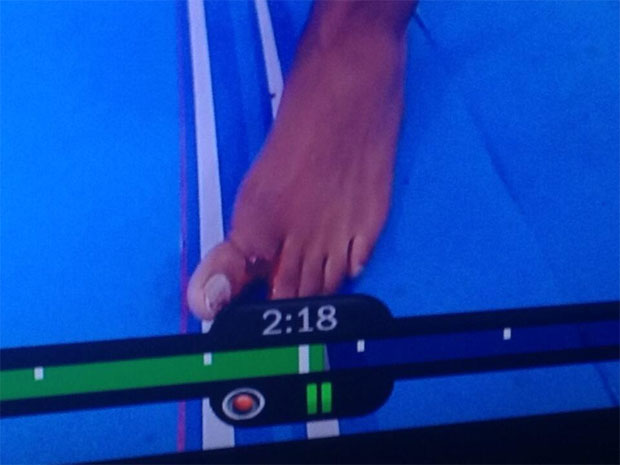 We have audio of the demonic voice that haunted UFC 159. Listen at your own risk
Read Next Post →
Click here to cancel reply.