Joe Riggs brutally TKOd a guy over the weekend and won a battle axe as a reward, seriously

If you’re not familiar with Joe Riggs, then all you really need to know is the dude had beef with Nick Diaz. Serious beef with Diaz. So serious that it was actually elevated to hospital food beef. After their UFC 57 match (Riggs grabbed the unanimous decision), Joe Riggs caught a right hook from Nick Diaz in a story that’s better told by Joe Riggs himself.

“We were like going to get a room, and like he is always popping off, talking smack. I go down toward his end of the hospital to find a doctor so he could watch me pee in a cup for the boxing commission, and he comes talking smack. I’m like, go back to the WEC. You’re bush league. You just got beat up. That’s two in a row. You’re out. I was just standing around talking sh*t to him. He was like, that’s it, and comes out of his room. I had my hands down. He starts coming up to me. I just never in a million years thought he’d throw a punch. He threw a right hook and hit me right in the chin. I mean it hit me right on the button. I seriously can’t say that I was knocked out, but I kind of went down to a knee. Then we just fought and scrambled. I put him against the wall and just Thai clinched and started kneeing the sh*t out of him. His nose was bleeding. I kept kneeing him, and they broke us up. That’s all that happened.”

Strikeforce saw the blatant rawesomeness in that story and decided to match them up at Strikeforce: Carano vs. Cyborg for the vacant Strikeforce welterweight title. Things were good, everyone was beating their chest in exhilaration and Riggs mysteriously disappeared into some hospital ward due to an ‘allergic reaction to an undisclosed drug.’ Just a few weeks prior, Josh Barnett was caught juicing by the CSAC and forced the collapse of an entire organization. While everyone speculated, Nick Diaz intentionally missed his CSAC urine test because of a prior obligation a ROOR glass bong. The MMA world suddenly turned into my sophomore year of college.

It’s been a while since we mentioned Joe Riggs on MiddleEasy, but now that he competed at ‘Made for War’ over the weekend and won a battle axe in the process — it’s time we revisit the former UFC welterweight. Check out Joe Riggs proudly rocking his ‘170 lb Pro Battle Axe,’ a reward from the promotion after he brutally TKOd Josh Cavan at the Douglas County Fairgrounds in Castle Rock, Colorado. 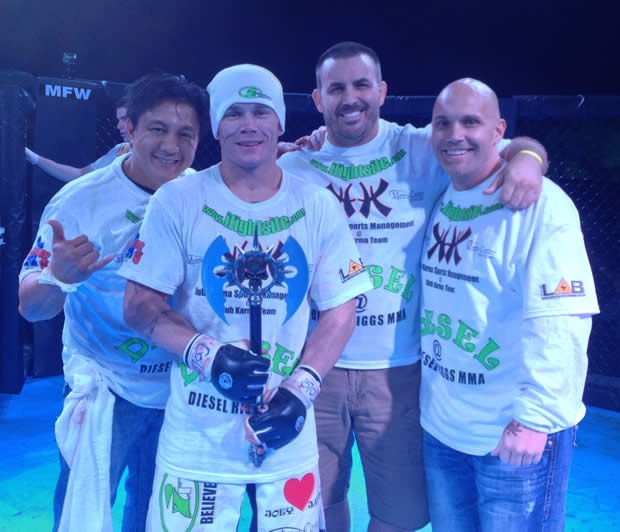 Don’t worry, we found the video of Joe Riggs’ taking it to Cavan via vicious ground-and-pound for your violent enjoyment. The action starts at the 4:12 mark.

While we’re at it, be sure to check out the epic promo for Riggs’ fight this past weekend. UFC television production crew — please take note.

For those of you wondering how Fabio Maldonado is doing, Dr. Anderson Silva has the diagnosis right here
← Read Last Post

Blast To The Past: Nick Diaz avenges his first loss to Jeremy Jackson in this extremely rare video
Read Next Post →
Click here to cancel reply.