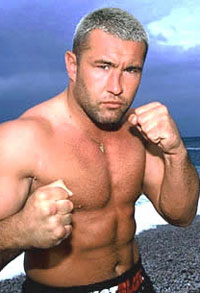 One day you will flick a booger inside of a room, and then days later your hand will accidentally rub upon that same booger and you will reel in absolute horror. For some, that day has already come, and you never want to revisit it. It’s called cosmic karma, and if you wear a tie-dye shirt when you say it, then it increases its significance. Jerome Le Banner has been on the unfortunate end of a series of really bad decisions in MMA and K-1. One could even argue that Le Banner edged out Satoshi Ishii in his Dynamite!! 2010 bout, but at 3:15am in the morning, everyone’s perception level seems to drop off significantly. However, when Jerome Le Banner vs. Kyotaro went into an extra round at the K-1 GP in Seoul in 2010, it was clear that Le Banner was somewhat shafted.

Now it looks like Le Banner’s universal luck has finally shifted over to the side that doesn’t involve him getting screwed out of possible MMA/K-1 wins. According to Jerome Le Banner’s official website, he will be headlining the upcoming Supremacy MMA game that we told you about a few months ago. Le Banner’s site is mostly in French (obviously), but a rough translation of his post has been translated by our buds at Riddum.com:

“Jérôme Le Banner will headline the video game Supremacy MMA, edited by 505 Games and developed by Kung Fu Factory. The game will be available on Xbox 360 and Playstation 3. More info soon to come !”

We’ve been trying to contact the people at Supremacy MMA for months now, but they keep putting us off. Egh, guess they don’t want their upcoming MMA videogame seen by the exact target audience they’re achieving. Ah well, at least we still have EA Sports MMA. [Source]

Watch Cecil Peoples land on top of a fighter and refuse to get off
Read Next Post →
Click here to cancel reply.