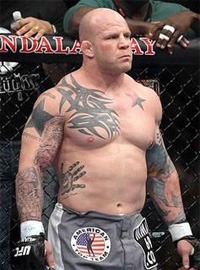 How rawesome of a match-up is this? If you wake up one day and notice your soul has been robbed…it’s probably in Jeff Monson’s back pocket (and you can’t do anything about it). Monson looks like he was assembled from the absolute worst parts of little kid’s nightmares and then wrapped in a blanket of tattoos. So when I tell you he’s a self-proclaimed ‘anarchist’, it shouldn’t even surprise you. If I told you he was an avid sock knitter…that’s surprising. In fact, if Jeff Monson knitted socks they would come with little packs of thermite knitted inside so that when you kicked someone’s ass, everything around that person’s ass would explode in a mushroom cloud of ‘that’s the coolest thing I’ve ever seen’. Some of you may remember Monson from his felony conviction when the dude tagged the Washington State Capital building with an anarchy symbol. We’ve tried getting a hold of Monson for an interview but he’s sort of been MIA for a couple of months (He’s an anarchist, what do you expect?).

Jeff Monson is scheduled to meet Pedro Rizzo in his hometown September 12th at an event called ‘Bitetti Combat’ (sounds like a finger food eating competition). Rizzo had sort of a raw deal after the ref at The Ultimate Chaos pretended like he didn’t see Pedro Rizzo go limp after the first right hook on the ground so he let the unconscious Rizzo get hit in the face a few more times before calling the fight (we even have pictures of it). Afterwards I saw Pedro Rizzo in the airport sitting with his crew and shook the dude’s hand for being a friggin warrior (but was too afraid to ask him for a post fight interview. Bummer). Rizzo actually met up with Monson in Texas a couple of years ago and scored the W with a monsoon of punches on Monson’s dome (couldn’t resist it). September 12th, Monson vs. Rizzo, Rio de Janeiro, Brazil…Guida may be there gnawing on some dude’s head. [Source] 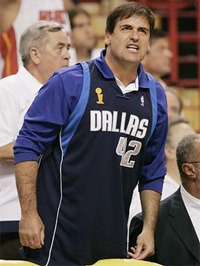