Jake Shields signs with the UFC, news that we already sort of knew 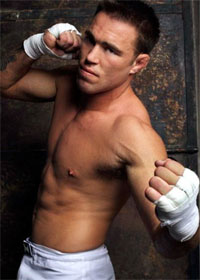 Everything has been officialized in the official officinating chamber: Jake Shields has signed with the UFC and will drop to welterweight to fight a ‘top’ contender and then eventually move on to GSP. It’s the one article of news that we already knew. In fact, we should all call it ‘knews’. Actually, I got a text about this last night at like three in the morning but I was more asleep than I was awake. You know, that point of the night where David Hasselhof can break into your apartment, fumble through your jeans, steal your wallet and you would think it’s a dream.

With Shields going to the UFC, I wonder what will happen to that beef Shields had with Mayhem after their Strikeforce middleweight title bout. It started off somewhat playful and ended with Jake Shields telling Mayhem Miller that his last real win was win he beat up his girlfriend and got arrested. Yeah, Jake actually went there. At the Strikeforce Hollywood press conference, I asked Jake Shields to explain his beef with Mayhem Miller on camera, unfortunately I chose to do it right next to that tin wall at Legend’s gym and without an external mic. If you can decipher through all the ambient noise, it’s some pretty hilarious stuff. Well, hilarious for us…probably horrible for Mayhem’s girlfriend.

Props to Jake Shields on his continued frate traneage and hopefully we will see GSP vs. Shields by the end of 2010 (everyone cross their fingers). [Source]