Contrary to what Rampage Jackson said, there will actually not be any ‘black on black’ crime inside the cage. As soon as Machida held the belt up last night Rampage Jackson broke down my door and screamed ‘I WANT MY BELT BACK!’. It scared the shit out of me. He was like the Kool-Aid man but instead of breaking down walls, he punches down doors and wakes up my functional alcoholic neighbor and all  12 of her cats. I can already hear all the people jumping on the ‘Hate Rampage Jackson Train’ and it tried to make a stop at the MiddleEasy Train Station but I derailed that junk.

Rampage Jackson wouldnt be known as such as bad ass if he wasnt such a bad ass. Think about it. Any dude that wears a chain around his neck everywhere he goes has the ability to knock out anyone at any given time. In fact, if you hear Rampage’s chains rattling, you’re about 10 seconds from waking up 5 minutes later on the ground in a pee puddle (eww). He’s like Spawn with those chains. The comic book version, not the movie one (I don’t know what happened there).

My advice for Rampage (coming from a guy who is sitting in front of his computer in his boxers drinking Pepsi One watching Friday’s episode of The View) is to not hold back. Be the ruthless dude that you are. Don’t be patient, patience killed…the cat? That was curiosity. Well don’t be curious either. Be Rampage Jackson and just leap on Machida like he stole your controller when you were on the last level of Mega Man 2, seconds from beating Dr. Wiley. At least that would be my inspiration. [Source] 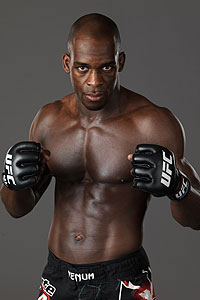