Islam Makhachev says it’ll only take 15 seconds for Alexander Volkanovski to panic once his back hits the mat.

After scoring a shocking first-round submission over Charles Oliveira to capture the UFC lightweight championship, Makhachev will defend his title for the very first time against the No. 1 pound-for-pound ranked fighter in the world, Alexander Volkanovski. The champion vs. champion clash will headline the promotion’s return to Australia on February 11th.

Appearing on Michael Bisping’s ‘Believe You Me‘ podcast, Volkanovski shared details of his training camp heading into the massive main event. Specifically focusing on preventing and recovering from the Dagestani destroyer’s takedowns, ‘The Great’ is confident that should he find himself on the mat, he will have the strength and composure to get back to his feet.

Islam Makachev believes that will be easier said than done for the featherweight champion who was quick to respond to Volkanovski’s comments, suggesting that once he hits the floor, he won’t be so cool, calm, and collected.

“After [the] first 15 helpless seconds on the ground, I guarantee you will panic,” Makhachev tweeted.

after first 15 helpless seconds on the ground, I guarantee you will panic https://t.co/zLsO4v3OE5

UFC Hall of Famer Khabib Nurmagomedov is so confident in his protege’s ability, he willingly spoiled Islam Makhachev’s game plan for his highly-anticipated return to the Octagon at UFC 284. In an interview with ESPN MMA’s Brett Okamoto, ‘The Eagle’ said:

Whether he has three months or six months to prepare, Nurmagomedov does not see any other outcome besides Makhachev retaining his lightweight crown and taking Volkanovski’s spot at the top of the pound-for-pound rankings in spectacular fashion.

“Even if he knows this [the game plan], let him prepare [for] this, how many months? Five months, six months? This guy [Islam Makhachev] has been doing this [for] 20 years” (h/t Sportskeeda) 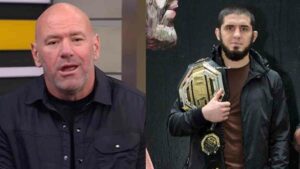 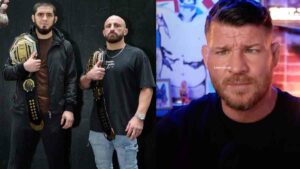 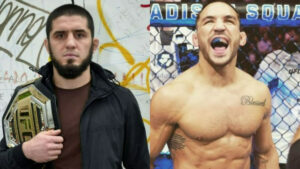