If you think Cecil Peoples scored in favor of Cole Miller at UFC on FOX, check this out

For those of you who aren’t familiar with Cecil Peoples, he was one of the three judges that scored UFC 104. He was also the same guy who judged the Bisping vs. Hamil match in favor of Bisping. He’s actually a well-respected martial-artist who received his black-belt in Karate under Master Ryusaki in North Hollywood. In fact, no one has really questioned Cecil People’s ‘martial-arts cred’ but it seems that everyone has something to say about the dude’s judging. The MMA world has proclaimed that Cecil Peoples is ruining the sport, he’s a terrible judge and even so far to call Cecil the worst judge ever.

After Cecil ruled in favor of Machida at UFC 104 and suddenly proclaimed ‘leg kicks don’t win fights’, he then told everyone that they can ‘go to hell’ if they don’t agree with him. Cecil Peoples wanted you to go to hell. Not the fun hell with the unlimited supply of Twizzlers, juice boxes and shiatsu massages. Cecil Peoples wanted you to go to the hell that has Mariusz Pudzianowski guarding its gates. The hell where you find out you will never seen another episode of America’s Next Top Model or eat another Sonic Chili Cheese Dog ever again. That’s the type of hell Cecil Peoples wanted to send everyone to if you didn’t agree with his judging of Lyoto Machida vs. Shogun Rua, and it’s the worst type of hell.

Last weekend at UFC on FOX, despite the absolute dominance Nam Phan displayed against Cole Miller, the bout ended in a split decision. We know you thought Phan was going to get yet another raw deal inside the Octagon. We all did. Two judges scored the bout 29-28 in favor of Phan while one scored the second and third round for Cole Miller. That judge was actually Lester Griffin, not Cecil Peoples. We even have his score card to prove it. Chalk one up for Sensei Cecil. 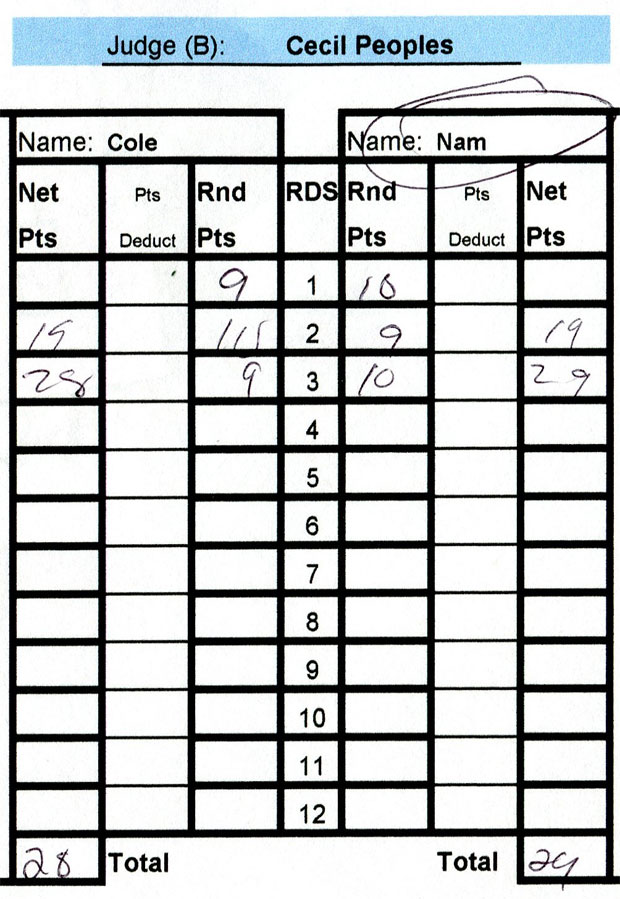 Watching Bas Rutten commentate every fight in his entire MMA career is as cool as you think it is
Read Next Post →
Click here to cancel reply.