On February 11th in Jakarta, Indonesia, two Featherweight prospects will step into the One FC ring looking to leave their mark on One FC’s Featherweight division. Undefeated Filipino prospect Honorio Banario takes on Korean Bae Young Kwon in a fight that could help elevate both men to the next level of their MMA careers. Banario is the URCC Lightweight Champion, making his first drop in weight to Featherweight to challenge Bae Young Kwon on just a few weeks notice after current URCC Featherweight Champion Eric Kelly had to pull out of the fight due to personal reasons.

Bae Young Kwon knew that he was stepping right into the fire when he signed on the dotted line to fight for One FC, but if Kwon has shown the world anything, he has shown the world that when you put his back against the wall, he will push as hard as he can. His last bout in December was for Road FC where he took on the undefeated Evolve MMA prospect Brian Choi, with Kwon grinding out a decision victory over Choi and impressing in the process. He is looking to do that yet again, this time in One FC. 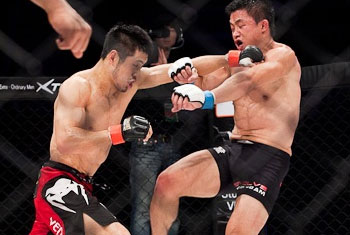 Kwon is no stranger when it comes to tough fights, with some good experience on the Shooto circuit in Japan, including two tough losses. The mark of a champion and a warrior is to come back from losses stronger than ever, and that is exactly what Kwon is out to prove going into his fight against Banario. Kwon has a strong background in Judo, including some really solid throws and a good submission game, but is not afraid to stand and bang, either. A Judoka with a strong stand up game can be a very scary thing, and Kwon has proved to be a versatile fighter who is confident in his abilities.

The X-factor going into this fight has to be considered to be Honorio Banario dropping to Featherweight for the first time, and doing so on short notice. Banario is a tough up-and-comer who trains alongside fighters like Eduard Folayang and Kevin Belingon, both URCC Champions in their own right. Sporting a sleek 6-0 record and coming in with a well-balanced fight style, Banario has to be looked upon as an early favorite, barring the possibility of a tough weight cut. In the fight game, momentum and confidence can sometimes be the deciding factor when walking into a closely-matched fight, and with only two of Banario’s six bouts going into the second round, Banario has to feel the wave of momentum behind him as he makes his One FC debut.

Both men step into the One FC cage this weekend looking to make a huge splash on the stage that is One FC and leave their mark. Without a doubt they both have a lot to gain with a win here, as the eyes of the world will be watching closely. For Banario he has a team of superstars behind him while Kwon looks to prove he is one of Korea’s best exports in the world of MMA.

Here's a bunch of footage of Anderson Silva training with Indians in the upper Xingu
← Read Last Post
A Lesson In Street MMA: If someone goes full zombie on you, just walk away, bro
Read Next Post →
Click here to cancel reply.