For those of you wondering how Fabio Maldonado is doing, Dr. Anderson Silva has the diagnosis right here

Fabio Maldonado didn’t fight Anderson Silva last Saturday night, instead he suffered a horrific one-sided beating at the hands of Glover Teixeira. The beating was so severe that it may have turned in MMA’s first legitimate 10-6 scorecards in consecutive rounds. That’s not to say that Fabio Maldonado didn’t lose in spectacular fashion. Because of his performance at UFC 153, whenever someone asks you who the toughest fighter in the UFC is, you’ll forget you ever thought that honor ever belonged to guys like Roy Nelson or Chris Leben.

I can’t think of any situation where I’d want to see Anderson Silva standing over me when I’m in severe pain or unconscious. Lately, that seems to be a common fate for all of his opponents. However, after making short work of Stephen Bonnar in Rio, Anderson Silva went to the hospital to visit his buddy Fabio Maldonado. He even brought his stethoscope and a smile. 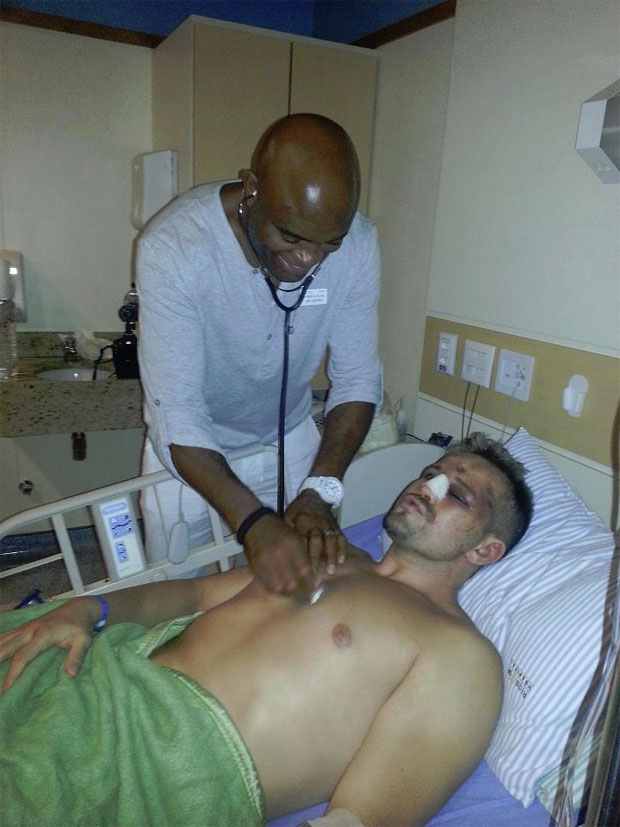 Joe Riggs brutally TKOd a guy over the weekend and won a battle axe as a reward, seriously
Read Next Post →
Click here to cancel reply.