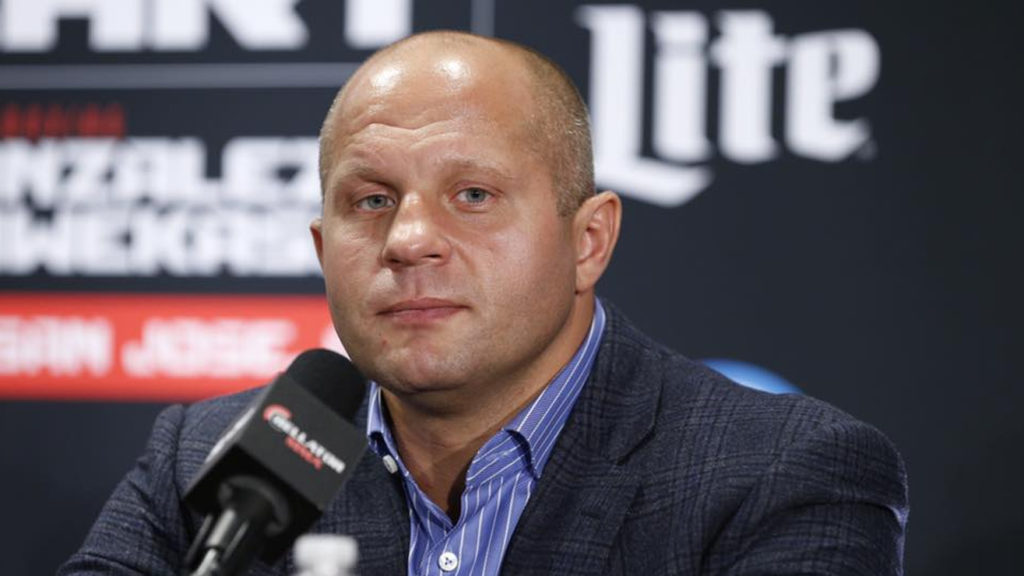 There is a lot going on in MMA world but Scott Coker President of Bellator is up to his old tricks again and drop the bombshell yesterday that they are putting together a Heavyweight Grand Prix that will feature some of the biggest stars on his roster.

With all the great names participating in the card, nearly every match-up is an opportunity to see bouts that we were never able to see due to the fighters not being in the UFC. Former PRIDE champion and GOAT contender Fedor Emelianenko will meet the former UFC heavyweight champion Frank Mir in the first round.

Frank Mir on his own Phone Booth Fighting podcast said:

“I’ll be a part of the eight man tournament that’s been announced by Bellator. I got the word just last night or the night before. I got the call to say, ‘Hey, we need a headshot. We’re putting you in this.’ I obviously agreed. They told me the names that were in there and it looks like I’ll probably be lining up with Fedor [Emelianenko], hopefully in April [2018]. It’s a huge moment. I didn’t even sleep that night thinking about it, running it through my mind, watching videos, already starting to try to pick apart his different traits and gameplans.”

Fedor Emelianenko will fight Frank Mir in his next @BellatorMMA fight pic.twitter.com/NV2D1B36W3

“I even told the wife, ‘What if I take off for eight-to-ten weeks and I got to Chechnya or something, Grozny, go through a training camp and really just take this as seriously as I’ve even taken any fight in my life.[…] It’s going to be interesting to finally see us face off. That was my first thought too honestly, ‘Wow, we’re going to fight each other right off the bat. Why wouldn’t you spread us out. It’d be interesting to watch the bracket.’ But I’m like, well, a fight’s a fight. Now, you have to worry about both guys coming through, not just one guy succeeding. So, you’re right. The most bang for your buck that guarantees that we’re going to actually face off is the opening round [sometime in April]. On Monday I’ll be flying out there [to Bellator] for PR stuff.”

In a very long time, probably in 16 years, Frank Mir will fight for an organization other than the UFC. Fedor Emelianenko and the UFC were never able to come to terms multiple times for years and years, robbing us of some potentially incredible fights. But President Scott has put together some incredible fights in Grand Prix.  Fedor Emelianenko and Frank Mir are targeted for the opening of the eight-man tournament in April of 2018.

Pic: Yahoo Sports reports Conor McGregor was arrested at his hotel then deletes it
Read Next Post →
Click here to cancel reply.