Eduardo Pamplona vs. Nick Thompson going down May 15th in Shine Fights 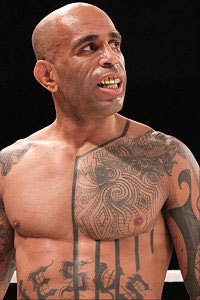 It’s hard to mention Eduardo Pamplona without mentioning that scene in Apocalypto where that guy gets his head chopped off. That essentially describes the entire movie. It’s just a non-stop set of sequences where people’s heads get lopped off with a few jaguars thrown in there. Pamplona looks like he could have wandered on set, grab a knife and ride shotgun with the antagonist. If you’ve seen any of the M-1 Challenges where Eduardo just throws his hands down and lets guys tee-off on his face, then you are already fully aware that his chin is constructed of adamantium. If nuclear testing ever came back in style (let’s hope not), the government could use the cleft if his chin to detonate hydrogen bombs. If that were true, Pamplona would die of radiation poisoning and it would be a sad day in MMA. Let’s just hope the government stays the hell out of Eduardo Pamplona’s chin, leave that to Nick “The Goat” Thompson.

Shine Fights has just announced that a bout between Eduardo Pamplona and The Goat will co-main event the Ricardo Mayorga vs. Din Thomas headliner going down May 15th in Fayetteville, North Carolina. This will mark Pamplona’s third return to the USA and this time everyone will simultaneously witness just how raw Eduardo Pamplona really is. Dude has Jesus tattooed on his stomach so he won’t forget his next opponent. If you want to have front row seats to the end of the world (still on the Apocalypto theme, although it doesn’t really work anymore), get tickets at ShineFights.com.

There just may be a Strikeforce/IGN conspiracy afoot
← Read Last Post
Jorge Rivera’s Matt Damon Impression is Better Than Yours
Read Next Post →
Click here to cancel reply.