We can’t even begin to tell you how much of a colossal nightmare Viacom and Spike TV is placing on their newly-acquired promotion Bellator — but we’ll tell you anyway.

Alright, so it’s evident that Viacom is using Eddie Alvarez to make a precedent for all fighters within Bellator: If you try to leave us, your life will be a living hell. It doesn’t really take a genius to deduct that from the endless litigation they’ve placed the former Bellator lightweight champion through this year. Another thing becomes pretty clear, although we may believe Viacom is overlooking this sheer problem: They’re alienating their audience with this highly publicized legal battle of fan favorite, Eddie Alvarez. We’ve already seen the disparaging remarks on Twitter and some of the ruthless comments made in a variety of MMA message boards towards Bellator. So in order to make an example from Eddie Alvarez, they’re hurting the same promotion in which they’re trying to flourish.

The silliest thing is, this is all their own doing. The UFC isn’t shoveling cash in an attempt to counterprogram Bellator and bring their televised events to obscurity. Heck, Dana White hasn’t even uttered the word ‘Bellator’ in any of his rants this year. Bellator’s fanbase and relevance is being destroyed by Bellator itself.

In reality, the highly logical thing to do would be for Viacom/Spike TV execs to realize that the guy they’re trying to keep through endless battles, is the guy that lost to the other guy (Michael Chandler) that they already have. Eddie Alvarez lost his Bellator lightweight title in stunning fashion to Michael Chandler at Bellator 58 in what could have been the Fight of the Year if Shogun Rua vs. Dan Henderson didn’t go down that exact night. Instead of promoting Michael Chandler as the guy that soundly defeated Eddie Alvarez, they’re exerting all their effort into forcing Alvarez to to fight for a promotion that he simply doesn’t want to be employed by. It’s actually disrespectful to Michael Chandler that Viacom would spend so much energy focusing on their ex-champion.

Here’s an easy method to remedy everything that has gone wrong with this arduous Viacom crusade against Eddie Alvarez. Let Eddie Alvarez go and in the process, literally get your entire Bellator fanbase back. Eddie will sign with UFC and be heavily promoted by the organization as the remarkable fighter that he truly is. Now here’s the fun part. Bellator should then promote the [expletive] out of Michael Chandler as the guy that beat Eddie Alvarez. Literally piggy-backing off UFC’s promotion of Alvarez and make that work for Viacom and Bellator.

Oh, and check out what Eddie Alvarez said over the weekend about his entire legal headache with Viacom. 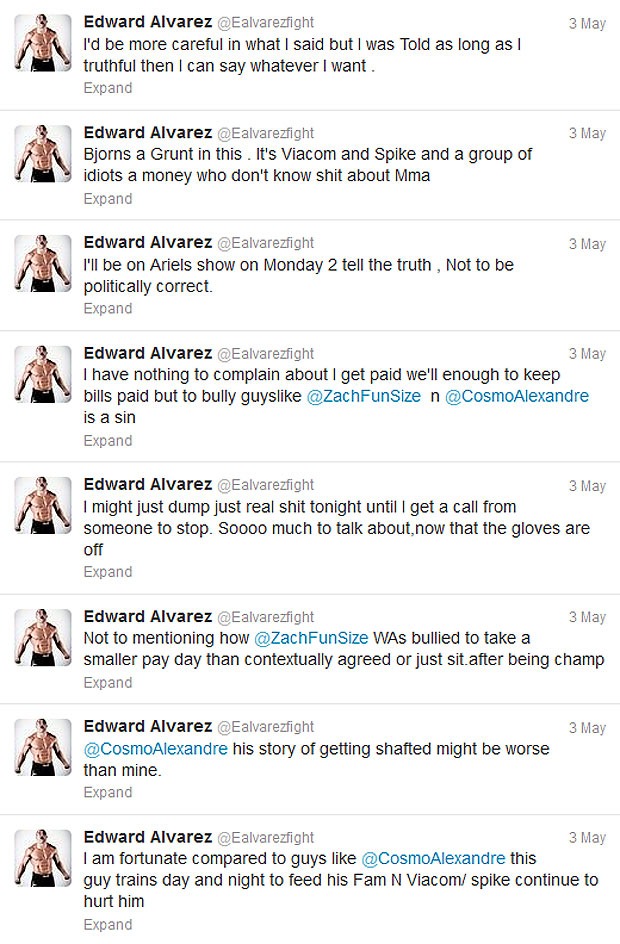 Ken Shamrock is here to talk about his 'Grandfather vs. Grandfather' match coming up in July against Ian Freeman
Read Next Post →
Click here to cancel reply.