Dream 14 in Korea has been canceled 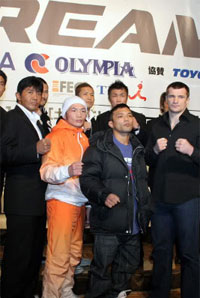 A turtle has an amazing pimp walk. That was my conclusion after watching the Discovery channel in Korea after I missed my flight at the Incheon International Airport a few years ago. Korea is a pretty dope place to have amphibians on television and an even doper place to host DREAM 14. The MMA world was expecting Hong Man Choi, Ninja Rua, Dennis Kang as well as a host of other Korean fighters that are known for their cranium smashing abilities to brawl at the Jangchung Gym in Seoul, South Korea on April 24th. Unfortunately, all of that doesn’t even matter anymore; Dream 14 in Korea has been canceled.

MFight is reporting that Dream 14 has been canceled due to some scheduled headliners being unable to participate on April 24th. Apparently this led to Dream officials not being able to secure a deal to broadcast on television. There’s a good chance that Dream 14 will still go down, just not in Korea. What a bummer for all of those guys that wanted to see Hong Man Choi participate in a fight that he could possibly win. [Source]