Sage Northcutt May Have Revealed His Dark Place Exists.

Sage Northcutt lives the gimmick. He’s the happiest MMA fighter on the planet. In every one of his appearances, Northcutt is always cheesing like a kid who was just told he gets to go to Disney World. In his head, I imagine Northcutt perpetually exists in Disney World, but some weird, new park where you can also gleefully fight dudes.

Up until UFC on Fox 18, the Blue Steel-faced model, actor and UFC’s hottest (in more ways than one) prospect had nothing to really frown about. Ever. But after tapping when a lot of people said he shouldn’t of tapped, Northcutt received a lot of backlash on Twitter from viewers who seemed to be just waiting for a loss to unload any slight grievance they had with the superhuman as if they were celebrating Festivus.

If there was a time in Northcutt’s career to crack, frown, become angry or show that he isn’t a cyborg locked on “totally hyped, sir!” mode, now was the time. I’ve had private investigators following this guy and I’ve never seen photographic proof of so much as a grimace. …Until now. 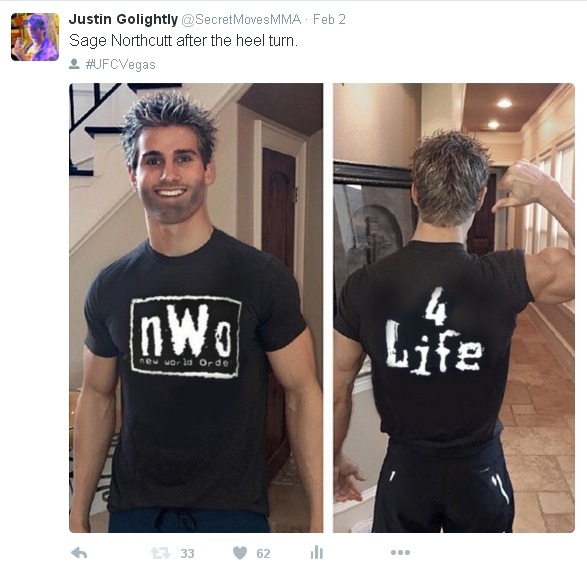 Intentionally drawing comparisons to Hulk Hogan’s previous, wholesome alter-ego, I posted an image I created of Sage Northcutt implying that he’d come back and shock the world by turning heel. That all this may result in our smiling, Golden Child metamorphosizing into a darker version of himself. Of course, my idea (like most of what I say) was preposterous.

All this changed yesterday when I got messaged from people telling me I predicted the future. Northcutt  posted a video specifically showing off a five o’clock shadow and winking into the camera.

Could it be a coincidence? Is Sage Northcutt a bad boy now? Is this the beginning of the sWo? Did he really just do the finger gun? Is this real life?!