On the plane to Manila, I tried watching Battleship solely because someone convinced me Deadmau5 did the soundtrack for the entire film. I got to the part where Eric Northman from True Blood was the goalie of a Naval soccer team and I was confused because I didn’t know the Navy let vampires play organized sports. Minutes later, I arrived at a point in the movie in which Rihanna was playing soccer and I realized that I was just part of an elaborate troll job. Instead of finishing the movie, I selected ’21 Jump Street’ from the in-flight entertainment and watched Ice Cube yell at Jonnah Hill for nearly two hour. Cube is the greatest single element of that entire film. Ironically, Ice Cube is not the greatest element of a cold glass of Pepsi.

In the end, I discovered Deadmau5 had nothing to do with Battleship — and there’s no way to regain those eighteen minutes I wasted on that movie. The best I can do is tell you guys that Deadmau5 is teaming up with UFC to create the most expensive electronic music video in history. Check out a couple of the promotional posters of the upcoming music video below. 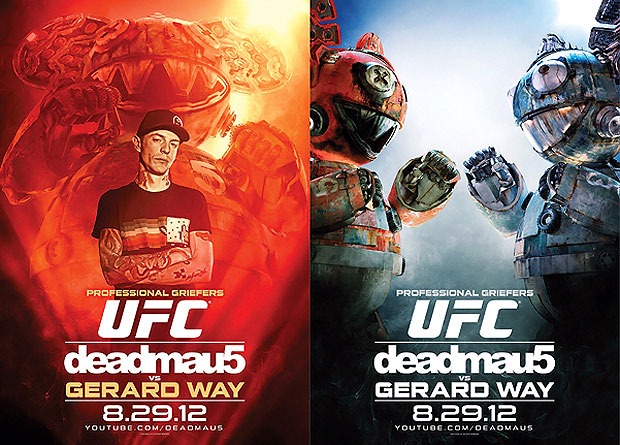 If you’re still salivating over this project (which will debut on August 29th 2012) check out this ‘behind the scenes’ clip of the soon-to-be released music video. Props to Stullo for the find.

This is why you should never let your champion fight anywhere else: Eduardo Dantas vs. Tyson Nam
← Read Last Post