So going down in this weekend’s UFC 172 fight card, it’s hard not to say Jon Jones vs. Glover Teixeira is probably the biggest light heavyweight fight the MMA world has seen since Bones took on Machida at UFC 140 back in 2011. Lyoto Machida posed the last real threat to his title — no one truly thought that Belfort, Sonnen, or Evans even had a shot at dethroning him. As far as his bout against Alexander Gustafsson, people only hoped Jones would lose to Gust, but after watching that fight again, Jones clearly won the fight, albeit a bit damaged and bruised.

Therefore when it comes to a light heavyweight bout, yes UFC 172 offers the most spectacular match-up in 3 years. Glover has finished every fight he’s been in since 2010 aside from when he fought Rampage Jackson. In his five-fight UFC career he’s fought a notable list of 205 lbers, the last of which he finished in the first round and received knockout of the night honors.

However Dana White wants you to believe the entire card is stacked, so let’s look at some of the offerings other than the main event.

Phil Davis vs. Rumble Johnson – OK, Rumble’s triumphant return to the Octagon since he missed weight by several hundred pounds (give or take a few hundred). This is your typical and cliche ‘styles make fights’ match-ups, so it could end in seconds or be the most boring fight of the card. If Jones vs. Teixeira is an A, I will give this bout a B-.

Luke Rockhold vs. Tim Boetsch – I’m not sure what this fight does for the middleweight division since we already know Machida, Silva, Belfort, Jacare get a crack at Weidman, and most likely in that order. C for still being somewhat relevant.

Jim Miller vs. Yancy Medeiros – Egh, this one is on the main card and I’m not sure why. Both guys are good, but remember we’re paying to see them fight. D-

Max Holloway vs. Andre Fili – Yeah, another fight that’s somehow on the main card. We just don’t care about this. F

I’m not going to go through the prelims, but the only three notable names are Takanori Gomi, Joseph Benavidez, and Jessamyn Duke. That’s it. Here, have a look for yourself.

Of course this isn’t the most stacked card in UFC history, however the UFC communicates in hyperboles — that’s why every fight we always get a ‘Greatest [insert thing] in UFC history’ mention. It’s all marketing people, so get marketed to and watch this new Dana White fight vlog. 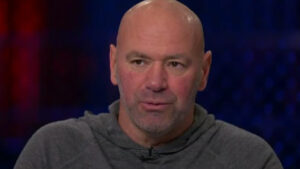