Dana White believes Bellator doesn’t exist, only in the metaphorical sense. We’re not discussing the existential nature of existence — because of course the real question we should ask ourselves is do we exist? In fact, does any of this exist? What about the words you’re reading — what are they? You can’t touch them, nor can you manipulate them. These ethereal words are guiding your perception of reality, yet no one even questions their existence in our world.

Perhaps Dana White is questioning the existential existence of Bellator — in that case, he may be right. Sure they’re owned by one of the largest media companies on the planet, but where do they truly reside in our dimension? Let’s get the facts straight, according to Dana White, the Icelandic vocalist Bjork is not running Bellator. Excellent, he confirmed something that we already knew. However in this Fighters Only UFC on Fuel TV post-fight scrum, Dana also goes off on Viacom and how he believes they should take a little bit of their $5,000,000,000+ empire and pay Eddie Alvarez.

Oh, and of course we had to throw this in there from our bud Kyle Haase. 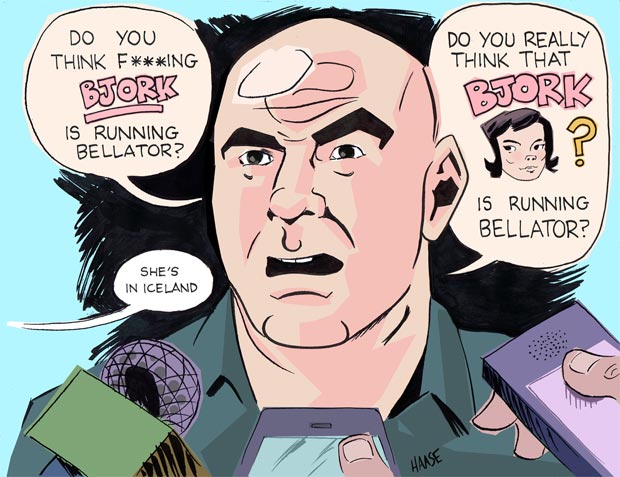 It begins once again: Nick Diaz, Dana White and the whacky world of promo shooting
Read Next Post →
Click here to cancel reply.