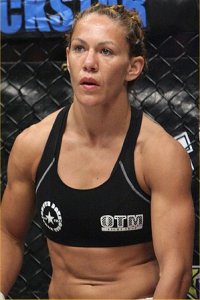 You know how in time travel movies, they always say if you go back in time and kill your grandfather it will create a paradox that can only result in the time/space paradigm collapsing like Ashley Judd’s acting career (look, she’s still hot people…relax). Well tonight, Cyborg may have created a rift in the universe by wearing sunglasses indoors and still grabbing a very decisive win (chick got a friggin TKO!).

Marloes Coenen did a great job of not getting knocked out. You have to give her that. She took improvised explosives in the form of fists from Cyborg throughout the night and still managed to keep the fight somewhat competitive on the feet. It looks like Cyborg is allergic to takedowns. Marloes tried to shoot for the double-leg, single-leg and even the ‘Damn, I just got hit in the face. Let me play it off like it was a takedown’ takedown. In the end, Cyborg proved to be an absolute mechanical android hell-bent on scaring the hell out of little elementary school cheerleaders when they go to bed at night.

Who’s left for Cyborg? We all know, but someone out there needs to pry her away from stalking Kim Couture. Erin Toughill has the best hands in women’s MMA. It’s not even debatable. This is the same chick that taught Razor Rob how to box. She was actually scheduled to fight tonight at the FCF Grand Prix but over seven chicks refused to fight her. Despite what Brandon Vera may tell you, Erin Toughill is the truth. Congrats to Cyborg, you are officially an unstoppable frate trane (that’s spelled correctly people).