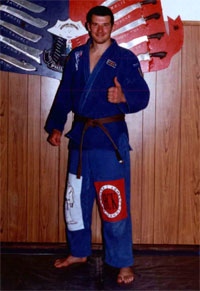 Stephen King should make a movie and the intro should start with a guy lying in bed. All of a sudden the phone rings and it’s Dana White. He tells the guy that a contract to suddenly replace Ben Rothwell at UFC 110 was faxed over to him. The guy takes some time to think it over with his friends. The small meeting becomes a raging University of Arizona-like kegger. He wakes up the next morning. Red cups are everywhere, someone passed out on his sofa, half his DVDs are missing and then he realizes that he signed a contract to fight Miko Cro Cop with only a two-day notice.

Replace the party with whatever Anthony Perosh does in his spare time (hey, we could be right) and that’s exactly what just went down in the complex galaxy that is the UFC. Ben Rothwell had to abruptly drop out of UFC 110 due to an undisclosed illness. To take his place is the 10-5 Anthony ‘The Hippo’ Perosh. Anthony’s last brawl happened at Rize 3 – Ascension in Queensland, Australia where he TKOd Kym Robinson in the first round. He’s about to fight a Pride FC demigod. Good luck man.

According to Travis at MMAScrapsRadio, Pat Barry was not medically cleared to replace Ben Rothwell however the rumor is he was on the list of potential opponents to face Cro Cop. That fight would be 90% legs, very similar to how I like my bag of discount fried chicken at Wal-Mart. You know, the little bags sitting on the top of the grill after the Deli closed. Come on, you know exactly what I’m talking about. [Source]