The fight starts with Cyborg stalking Smith right off the bat. Leaving Smith on the backfoot, Cyborg would enter the clinch with the challenger. Cyborg would open up, unloading a multitude of strikes. Executing punch after punch, kick after kick, the Brazilian brawler would send Smith down to the ground with a brutal knockdown. She would topple Smith from up top, landing some bombs from a dominant position. Smith would then get suplexed by Cyborg in explosive fashion.

Smith would eventually get up only to be lit up once again by Cyborg, stumbling at times on the feet. Smith would not back down however, who added some pressure to the champ, moving forward at the end of the round.

In the sequel round, the assault behind Cyborg’s style would slow down, being more methodical and calm in her approach. The reigning champ would pick her shots from a distance like a true boxer. Smith would often times enter the pocket to slug it out with Cyborg, not standing down to her opponent.

Cyborg would chop up the legs of Smith with kicks, like an axe to a tree. Cyborg would bring the war to ‘Peacemaker’ towards the end of the round, rocking her with strikes. Blood was in the water and Cyborg, being the shark she is, would follow through with the attack. Smith survives.

The fight remains to be seen on the feet. The kickboxing centered MMA match between the two would however be taken down to the ground with a successful sweep by Cyborg. Smith would throw a kick which was picked up by Cyborg who got a beautiful takedown. Smith would get up, trying to get her own takedown but was unsuccessful.

Smith would have some success in the round, landing good body kicks here and there. Smith would also land some successful boxing combinations, lighting up Cyborg in a minor way. Cyborg would lock on and sharp-shoot for the rest of the round.

Smith would continue to work her kickboxing, exploring an arsenal of different strikes. Cyborg would land some crushing leg kicks which would put some wear-and-tear on the legs of the challenger. The duo would meet in the middle clashing with strikes, putting on a show for the fans at home watching. Cyborg would sting like a bee and float like a butterfly.

Near the end of the round, Cyborg would catch another kick from Smith, knocking the unbalanced opponent down. She would then dominate on the ground.

To much surprise, Justino would shoot for an early takedown on Smith which was again successful. Sliding into side control, Smith would be pounded on with great ground and pound from the charging Cyborg. Smith gets up and a burp was shared between the two, leaving the two to smile.

Cyborg would get another takedown and then was able to knock down Smith once again, finally finishing her off in the last seconds of the fight.

🔥 @CrisCyborg drops @LeslieSmith_GF in Round 1️⃣

Another strong round from the champ @CrisCyborg 👊

The final :3️⃣0️⃣ of round 3️⃣@CrisCyborg and @LeslieSmith_GF are headed to their championship rounds LIVE on @SHOSports NOW.

🗣 @CrisCyborg says she has her next opponent in her sights.😼👀 pic.twitter.com/XpTw3QGFx5 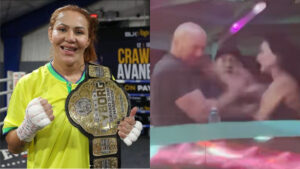 Cris Cyborg Claims Dana White Initiated the Physical Altercation: ‘He Was the Aggressor’ 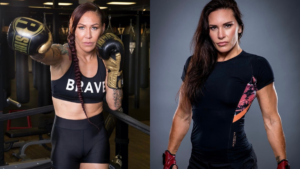 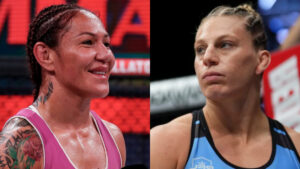 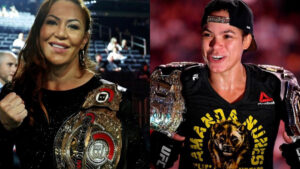 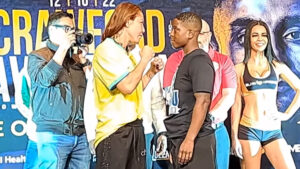 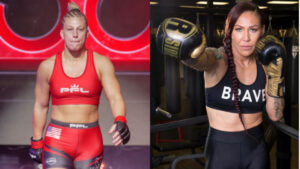