I prefer my conspiracy theories much like I prefer my milk, whole. Nothing too whacky and with as little holes as possible — although, it’s impossible to place a hole in milk. Well, unless you freeze a cup of milk and then puncture holes in it, but if you go to that extent, you’re just a ridiculous human being.

Before reading this article, my only request is that you put on your tinfoil hat. You know, so the government can’t read your brainwaves. It’s like conspiracy theory 101. All of my baseball hats are lined with aluminum foil just to prevent the government from tapping into my cerebellum. The only drawback is that in a thunderstorm, I’m a friggin’ walking lightning rod. Six-year Sherdogger, ohshizabear, has proposed that Jacob Volkmann was cut from the UFC solely because of Joe Rogan. Yeah, it’s a doozie. Read his entire theory below.

Please, if this has been brought up before and you’ve already read a thread about this, stop reading and don’t respond. I don’t care.

I was watching the fight between Bobby Green and Volkmann tonight because I hadn’t seen it and, quite frankly, I wanted to see Jacob Volkmann get submitted after presumably playing it safe against and out-grappling another opponent.

In the third round, Volkmann takes Green’s back and Joe begins talking about how “Bobby needs to separate these legs,” then Bobby separates Volkman’s legs. If you look past the cage in the shot, you can see Rogan’s bald head with his headset on as he calls the fight, right next to where the fighters are. Rogan pauses before mentioning that he doesn’t want to give “too much direction here.” He then proceeds to describe exactly what Green needs to do in order to win the fight.

After the fight, Green celebrates, then walks to the side of the cage. You can’t see Rogan, but it looks like you can see Goldberg with his headset on, Green points off-screen and says “Hey! You the man!”

Volkmann, a fighter who had gone 6-2 at LW (including this loss), is then cut from the UFC.

I think that Joe Rogan’s expert commentating and knowledge of jiu jitsu affected that fight and effectively got Jacob Volkmann cut.

Watch the last few minutes of that fight and tell me I’m wrong. Powerful Joe Rogan.

We can’t publish the video of the UFC 156 bout for the obvious legal reasons, but feel free to watch it on your own time and tell us if this guy is on to something, or completely paranoid. 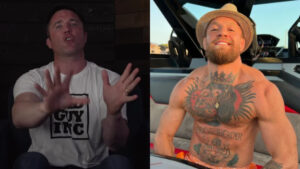 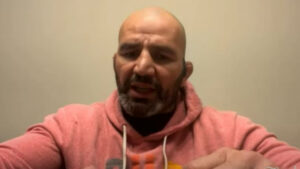 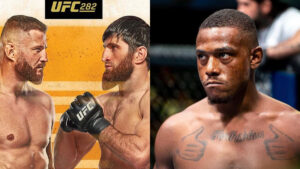