"The Notorious" is confident he knows how to crack the Islam Makhachev puzzle.

A big event such as UFC 280 captured the attention of Conor McGregor, the biggest star in the sport. Nothing is concrete yet as to when McGregor will make his UFC return but as expected, “The Notorious” already sees himself beating the new lightweight champion Islam Makhachev.

McGregor breaks it down

Makhachev was letting Charles Oliveira have it from the opening round. He landed a few solid shots on Oliveira and controlled the Brazilian on the ground for the most part. The Dagestani fighter picked up where he left off in Round 2 and finally rocked “do Bronx” with a right hook. When Oliveira hit the mat, Makhachev took over and submitted the former champ via arm triangle choke.

Ultimately, it was an exceptional performance from Makhachev, who didn’t only cop the lightweight strap but also improved his unbeaten record to 11 in a row. However, McGregor wasn’t impressed.

In a three-part, now-deleted tweets, the former UFC two-division king broke down how he’ll edged Makhachev.

“Nice fight. nice performance. I have built all the tools to beat this style now Vs b4. Experience Vs 💩. Face breaking shots from clinch and baby brain batter shots from bottom. And the rest of my repertoire yous know. Steel left leg. Cannon back hand. Wrist control,” McGregor began.

“The thought of shutting down this system of fighting with my own developed system is quite intriguing to me. Whoever of them against. It’s not personal. It’s a skill evaluation and a fight. Even thru generations. The imaafs, amateurs. A war of attrition. To the box,” he continued.

In his conclusion, McGregor boldly involved Khabib Nurmagomedov and his late father Abdulmanap in his rant, pointing out:

“I have the system to hurt this style of fighting guys I am telling you. Bro is a sh*t jocks. Fat mouth shut your mouth you done nothing tonight except go against fathers wishes and run. It’s not fathers plan completed yet, pal. You know. Your people know and they talk about you.” 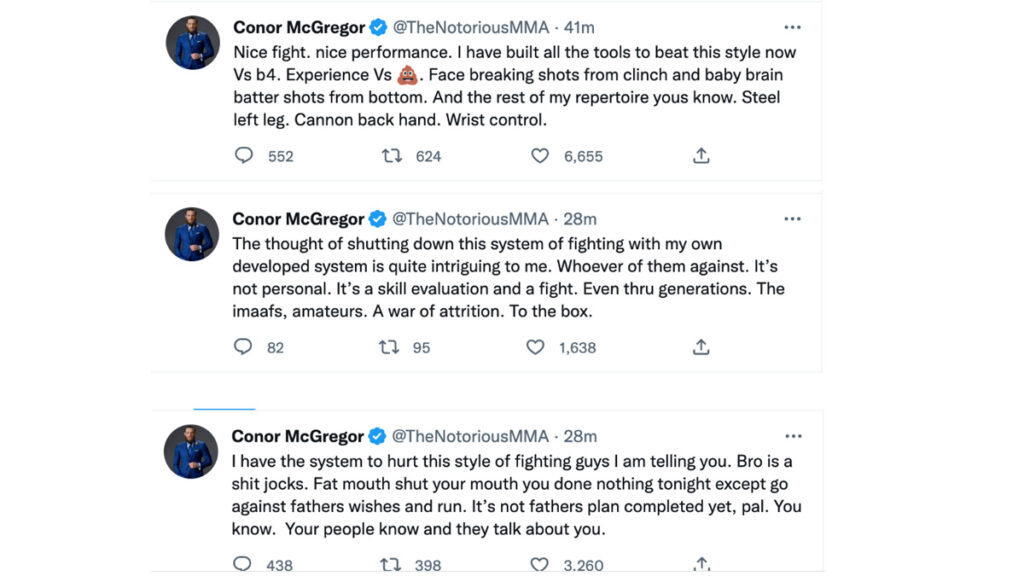 “You are low life shit stop talking about people family you need a face slap soon nobody cares about you,” Abdelaziz wrote.

McGregor’s former sponsor and clothing brand “Dethrone” also took a swipe at him for not coming out of inactivity and return to fighting. McGregor immediately clapped back and said in an also since-deleted tweet:

“The disrespect. Don’t worry Fatso fat tits, I’ll be back doing what I love soon. Competing!”

Aside from Abdelaziz and Dethrone, former UFC welterweight Ben Askren also took a shot at McGregor for being away for too long but constantly calling out everybody.

According to Askren, “The Notorious” is just trying to be as relevant as possible in order to get an instant title shot and leapfrog other contenders.

“Conor just wants to skip the line and try to get a belt. Maybe he should get back in USADA pool,” Askren wrote.

Conor just wants to skip the line and try to get a belt 🙄🙄🙄. Maybe he should get back in USADA pool https://t.co/IfI6tapDBh

Of course, McGregor responded to Askren and said, “Wow. Jacka**. No.”

Askren went on and hit back at McGregor once again, urging the Irish MMA superstar to call it quits already.

“Bro you aren’t even in the USADA pool. You don’t want to fight anyone. I retired 3 times and still have 4 times as many wins as you since 2017. As much as you are scared to admit it YOU ARE DONE,” he added.

Bro you aren’t even in the USADA pool. You don’t want to fight anyone. I retired 3 times and still have 4 times as many wins as you since 2017 😂😂😂. As much as you are scared to admit it YOU ARE DONE https://t.co/XcDDy8nPV6

After not getting any reply from McGregor, and realizing the tweets have been deleted, “Funky” delivered one final blow.

“I think Conor’s handlers took his phone, deleted his tweets and but him to bed,” he concluded.

I think Conor’s handlers took his phone, deleted his tweets and but him to bed 😂 pic.twitter.com/RDcE5BL020

McGregor previously said he wants to compete at welterweight in his return. Now that he seems interested in Makhachev, it only goes to show that the lightweight division is also under his radar.