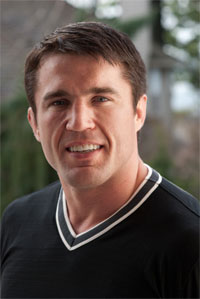 We’ve all been sucked inside the Chael Sonnen rabbit hole against our will and every morning, the voyage seems to get a tad more bizarre. This morning is no different.

If I told you that Chael Sonnen informed the California State Athletic Commission that he was using illegal performance enhancing drugs prior to UFC 117, I’m not even sure if any of you would be that blown away. This is Chael Sonnen, the most interesting man on the planet. His actions shouldn’t be questioned, they should be studied by Harvard scientists.

Sports Illustrated’s Josh Gross discovered that Chael Sonnen gave the CSAC a warning that he was taking an illegal substance but failed to indicate the reason for the performance enhancing drugs which is apparently a requisite by the commission. California State Athletic Commission Executive Officer George Dodd expands on this bizarre occurrence.

“He only indicated that he was taking it but he never indicated why. [Chael Sonnen] just let me know he was taking [something] and that’s when I called over an inspector to get it documented. But when you do take it you still have to show a medical reason.”

I’m just going out on a limb here but wouldn’t the reason of taking a performance enhancing drug be to…enhance one’s performance? I’m pretty sure that’s the reason why Chael Sonnen allegedly used steroids. No investigation needs to be done here. I’ve just saved the CSAC an ample amount of money which they could use to do something more productive like…pre-fight olympic-style drug testing similar to what happened at Affliction: Trilogy.

Honestly, what the heck is going on here? The California State Athletic Commission knew of Chael Sonnen’s illegal use of a performance enhancing drug but still greenlighted his fight with Anderson Silva and now it seems like they’re pointing the finger at Chael Sonnen with the excuse of ‘he didn’t tell us why he was using performance enhancing drugs’.

I hate ending articles with questions, but in the case of Chael Sonnen I’ll make a rare exception: Who really is at fault here, The California State Athletic Commission or Chael Sonnen? [Source]

Butterbean says in two years, Mariusz Pudzianowski will be impossible to defeat
Read Next Post →
Click here to cancel reply.