Chad Mendes just pulled off the first finish of UFC 148

Just as I was writing this, Demian Maia just used Brazilian magic to break Dong Hyun Kim’s rib. That would make his fight the second finish of tonight, effectively stealing the title of the only finish of tonight thus far by Chad Mendes and Cody McKenzie. Bummer.

We all love Cody McKenzie here on MiddleEasy. Let’s face it, who else would let us create a skate video featuring them cruising around Northern California? Unfortunately at UFC 148, not even Ronda Rousey appearing in McKenzie’s corner could stop the absolute force Mendes placed on McKenzie’s torso resulting in a 31-second knockout in the first round. Apparently Mendes is getting payback from the first round knockout Jose Aldo placed on him back in UFC 142.

Props to Chad Mendes on literally igniting whatever dynamite UFC 148 has in store — oh and here’s the .gif of the finish, compliments of ZProphet.

Jake Shields wants to be the first in the UFC to beat Anderson Silva, but he's cool if Chael does it before him
← Read Last Post 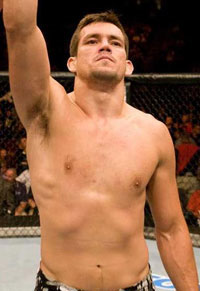