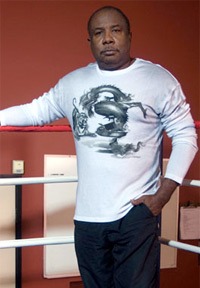 For those of you who aren’t familiar with Cecil Peoples, he was one of the three judges that scored UFC 104. He was also the same guy who judged the Bisping vs. Hamil match in favor of Bisping. Dude’s actually a well-respected martial-artist who received his black-belt in Karate under Master Ryusaki in North Hollywood. In fact, no one has really questioned Cecil People’s ‘martial-arts cred’ but it seems that everyone has something to say about the dude’s judging. The MMA world has said Cecil Peoples is running the sport, he’s a terrible judge and even so far to call Cecil the worst judge ever. CageReport.net dodged all the flying tomatoes and spoke with Cecil Peoples about his decision to score the fight in Machida’s favor and this is what he had to say:

“First of all what you need to understand is that from where the judges are sitting, we get to see things that the fans at home may miss. Mauricio Rua was being aggressive but it wasn’t effective aggressiveness which is what we as the judges look for when scoring a fight. The way I saw it, Lyoto was landing the more cleaner and damaging strikes throughout the fight – if you take a look at the judging criteria clean strikes are valued more-so than the quantity of strikes landed. Although Rua threw a lot of low kicks they were not as damaging as Lyotos diverse attack in the earlier rounds which is why I scored the first three rounds for Machida. You have to keep in mind we always the favour the fighter who is trying to finish the fight, and leg kicks certainly don’t do that.“

“When both fighters are engaged in a striking match what I always look for is the fighter who is being judicious, picking his spots, being accurate and landing the cleaner strikes which ultimately is what Lyoto did more effectively than Rua. Lyoto made Shogun come after him, he determined where the fight took place which in my opinion constitutes as effective Octagon control. I recognize the fact that Rua did have a few takedown attempts during the course of the fight however Lyoto defended them all successfully which counts as effective grappling in his favour, where as ununsuccessful takedown attempts are not scored at all. Therefore going by that criteria, I believe Lyoto won the fight clearly. I’m just glad the other judges on the panel saw it the same way and I’m sure the fans who understand the technicalities of the sport agree with the decision too.”

It’s not what you think, it’s what they think that matter…literally. Another one in the books for the MMA world’s favorite judge and if you act fast, you can scoop his limited edition action figure. [Source]