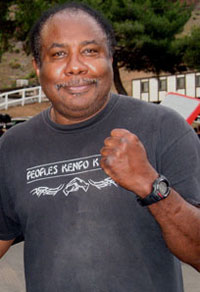 WEC 49 needed a disclaimer before it was even promoted. That disclaimer should read ‘Dude, Cecil Peoples is a judge‘. That’s it. It would have struck fear into every fighter on the card who expected to win via unanimous decision. You may dislike Jamie Varner for being a self-proclaimed ‘heel’ of the WEC, hell you may have even created a miniature Jamie Varner voodoo doll that you’ve stuck pins in late at night over a candle lit alter. But to call the main event at WEC 49 a draw is beyond hilarious.

By raising his arms after he’s been rocked and making indiscernible screams whenever he connected, Kamal Shalorus proved why he should be considered the closest thing we have in MMA to Conan the Barbarian. We all know this guy will be champion by the end of next year. However after landing three inner-thigh kicks directly to Jamie Varner’s testicles, the ‘Prince of Persia’ should have just pushed the X button to rewind time and do it all over again. Unfortunately, I live in an unrealistic world where I blend videogames into real-life. Shalorus was deducted one point in middle of the second round and while Kamal seemed to be winning the better part of the leg exchanges, Jamie Varner’s counter punch seemed to always find Shalorus’ head a split-second before he landed a shot.

At the end of three rounds, the fight went to the judges who scored the bout: 29-27 for Varner (Doc Hamiliton), 29-27 for Shalorus (Cameron Quwek) and your boy Cecil Peoples scored the bout 28-28 sending the bout into a rare split draw.

If you can’t leave the fight in the hand of the judges, the why have judges at all? Throw in an extra round if a fight goes to decision. One long ten minute round until someone decisively wins. If it’s a stalemate after ten minutes, call it a draw. Cecil Peoples may be out of work, but I’m sure he can get another gig being that guy with the afro in a Kung-Fu flick.